Melrose in the Mix: The Pauses Q&A 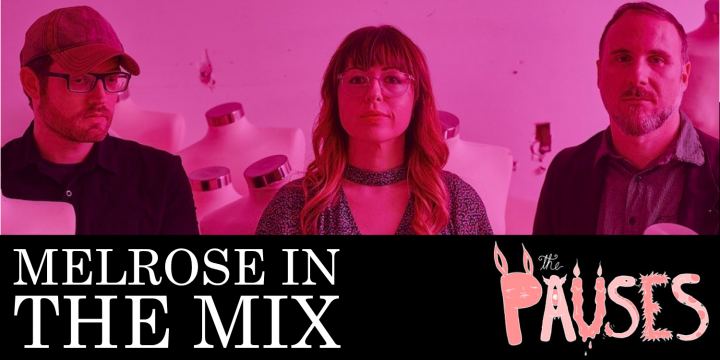 Touring regularly in support of their acclaimed 2018 album Unbuilding, Orlando band The Pauses come home to perform at Melrose in the Mix on Saturday, July 6, 3:30 p.m. Click here to reserve your seat. Library staff member Scottie Campbell had the opportunity to ask the group a few questions about their upcoming performance, returning to their hometown and how books have influenced their music.

Did you ever think you’d record an album in a library?

Tierney Tough: It never really crossed my mind, but I’m really excited about it. I love this building and have been coming here since I was a kid. So, that’s kind of special.

Jason Kupfer: Definitely not, but I’m really hoping that an exasperated librarian pokes her head into the room in between each song and shushes us.

You’ll have a limited audience watching your recording. How does that impact the recording?

JK: Recording live video sessions can sometimes feel a bit removed and impersonal. Having an actual audience in the room allows us to connect with a real human element in the moment. Also, all the mistakes you make and ask to have edited out now requires the swearing of an entire room of witnesses to secrecy.

What do you have planned for Melrose in the Mix? Existing music? New music?

TT: We’ll be playing a handful of songs from the new record and also, hopefully, collaborating on a song with the Girls Rock Camp!

Has there been a book that has inspired you in your art?

TT: I’m a slow reader, but I’ll find myself checking in with some biographies every now and then. I like to know how other people live this lifestyle, I guess, and can usually find some sort of takeaway from their experiences. Right now, I’m reading Jason Molina: Riding With the Ghost, and am purposefully putting it off a little bit, because it’s such a sad story. But, so far, there’s a lot of good insight on how labels worked in the '90s vs. now, and how to not deal with certain stressful situations and interpersonal relationships, which is always helpful.

When you come back to Orlando from a tour, is there something you need to reconnect with?

JK: While on tour, I think we all dream about coffees that aren’t from gas stations and beds that aren’t floors. Also our loved ones and pets are pretty nice to eventually return to.

TT: My domestic self and my dog.

In addition to experienced artists, Melrose Center is a place where novices come to learn. Is there any piece of advice you could give to someone just starting in the industry?

JK: Trust your initial instinct for wanting to do this in the first place. Making music can be a pretty steady stream of disappointments that can easily discourage you from wanting to stick with it. When it gets most challenging, remind yourself of why you picked up an instrument to begin with.

TT: Take advantage of resources like this! I’ve done several classes at the Melrose Center, and am so grateful that we have this free program that offers so much creative/technical information to people with just a library card.

Sometimes non-Orlandoans are surprised to learn we’re more than theme parks; do you get that reaction when touring?

TT: Sometimes we’ll get befuddled looks when asked where we’re from, which often feels like an explanation is required. But, over the years, we’ve actually encountered a lot of expats and people who are familiar with the Orlando scene, which is nice.

melrose in the mix
the pauses
library staff
music
melrose center
Comments and postings by library patrons do not necessarily reflect the official position of OCLS or its staff. All comments and posts are public records. Patrons are strongly encouraged to protect their privacy when commenting or posting on social software tools.
About

OCLS
@oclslibrary
That's not cranberry sauce! In the mood for some cheesy 80s holiday horror fun? Check out the ultimate feel-bad Tha… https://t.co/HlIiQOBQcl
1 hour 14 min ago

OCLS
@oclslibrary
Ready to become a U.S. citizen? The library can help! Register for Citizenship Inspired, a four-week program that… https://t.co/be1tImHnFh
3 hours 18 min ago

OCLS
@oclslibrary
Family walks, bean-bag toss, and cheesy monkey bread? Check out these inspired ideas for having a fun and safe Than… https://t.co/r55plQIjxV
5 hours 9 min ago