I Love My Library Card 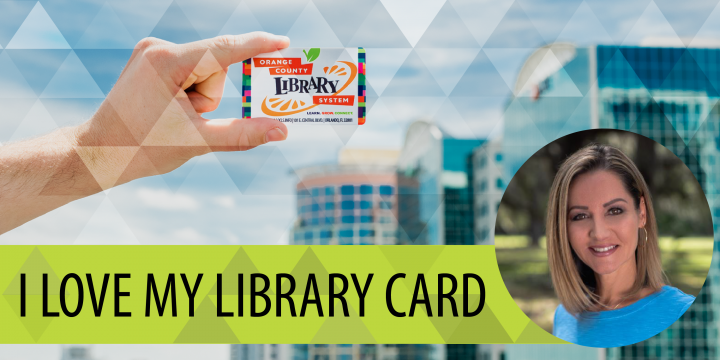 I grew up in the 1980s, before the internet existed. There were no smartphones or video streaming services. I couldn’t watch Netflix or text my friends. I had to entertain myself in other ways, especially in the summer when school was on break. Sure, there was a lot of playing outside, partly because we lived just a few minutes away from my cousins in a much cooler climate than Florida, but also partly because we lived right next door to an elementary school. I had the entire playground as my backyard.

We also lived right down the road from the public library. Once I was old enough to venture out on my own, I rode my bike to the library and spent hours rummaging through the shelves. Fiction books were my favorite. Stories about interesting people in exotic places fascinated me. I could leave my small town and my little playground and travel the world in my mind. I sat for hours reading the back covers of books trying to decide which ones I wanted to read first. Usually I checked out a whole pile at a time and then had to extend the deadline for return on at least one or two.

I never understood people who said they didn’t like to read. I always told them they just weren’t choosing the right books.

Reading was my escape. I went on so many fun adventures. I lived during a different time in history. I ventured into the future. I fell in love more than once and made lots of new best friends. There is something about reading that is very different from watching television or a movie. Your imagination can take you to places that Hollywood never can. The colors are more vivid, the emotions more intense and the stories more real. You are inside the story, part of the narrative, rather than an outside observer.

The best part of my library visits was that all the books were free! My family didn’t have a lot of money. In fact, we were quite poor for many years. I didn’t have the newest toys or the best clothes. But I could escape to lands far away without paying even a penny. I could dream about the future. I could plan my career and read about colleges and universities. I found a book written by Jessica Savitch, one of the first female TV news anchors, which provided some inspiration toward my future in TV. It was the first time I ever even thought about becoming a journalist.

It’s pretty cool we live in a country that makes reading and books a priority. School is required and libraries are free to all. We have the opportunity to check out free books (and loads of other materials, too) to learn, be entertained, cry or laugh. Anyone can get a library card and use it. I am so thankful I took advantage of mine starting at a young age.

Do you have your card yet?
What is stopping you?

Amy Sweezey recently joined Growing Bolder as a Special Projects Producer and writer after retiring from a 25-year broadcast meteorology career. She has authored two children’s books about weather and created two weather workbooks for elementary students. Amy and her husband live in Central Florida with their three children.

National Library Card Sign-up Month
library card
reading
guest writer
Comments and postings by library patrons do not necessarily reflect the official position of OCLS or its staff. All comments and posts are public records. Patrons are strongly encouraged to protect their privacy when commenting or posting on social software tools.
About

OCLS
@oclslibrary
Register for House Bunny Basics this Saturday! Orlando Rabbit Care and Adoptions advises you on the basics of rabbi… https://t.co/GP8aKDL076
1 hour 13 min ago

OCLS
@oclslibrary
#OTD in 1913, the women’s suffrage movement marched down Pennsylvania Avenue in their first major demonstration in… https://t.co/1TptPCoN54
3 hours 12 min ago