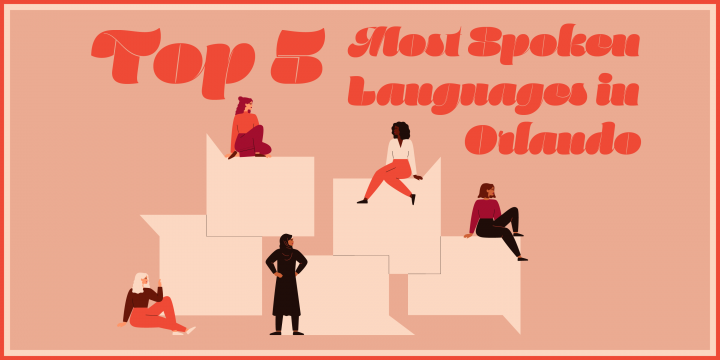 After a whole year of COVID-19 quarantine, you have no doubt mastered several different hobbies, or became an expert in the field of online programs. It won’t be too long before you’ll be free to unleash your new skills and interests upon the world. You might be asking yourself "Who should I share my interests with?” If your answer is “everyone,” then you will reap great benefits from learning how to talk to someone who doesn’t speak your language. The Orlando area is beautifully diverse in terms of languages, but, for the sake of efficiency, we’ll stick with the top five most-spoken languages.

If all this talk about the languages of Orlando has got you excited to learn a few, no worries. We have you covered! Orange County Library System maintains an impressive collection of language learning books, CDs and DVDs. We also benefit from online language learning platforms like Mango Languages, Rocket Languages and Pronunciator, available to all OCLS cardholders!

language learning
ESOL
languages
mango langauges
Comments and postings by library patrons do not necessarily reflect the official position of OCLS or its staff. All comments and posts are public records. Patrons are strongly encouraged to protect their privacy when commenting or posting on social software tools.
About

OCLS
@oclslibrary
May has been observed as Mental Health Awareness Month in the United States since 1949. https://t.co/fBUOEP4FOL
10 hours 2 min ago

OCLS
@oclslibrary
On May 22, @orlandoscience Center will open their newest exhibition, Rescue. For this month’s DIY Film Festival, jo… https://t.co/hYt1ho4GWd
12 hours 35 min ago

OCLS
@oclslibrary
Tweens can celebrate National Limerick Day and learn about the history of limerick poems. Then follow along as they… https://t.co/EulNbqL5gz
14 hours 23 min ago