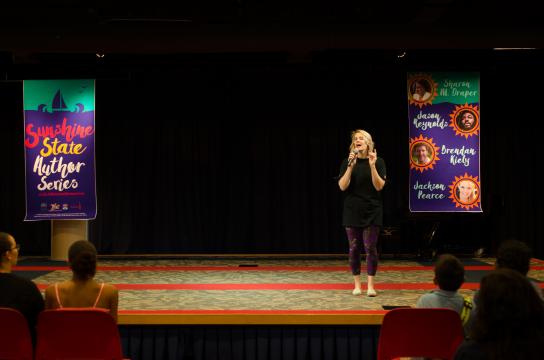 Sunshine State author Jackson Pearce entranced audiences at Alafaya Branch and the Orlando Public Library on March 8 and March 9 with the true story of a wounded rat that she saved from the jaws of a cat, put in her backpack and brought home at age 9. The rat, much to her mother’s chagrin and her delight, survived—and then escaped from her room. As a child, Jackson had difficulty telling the difference between pets and pests, a problem she shares with Pip Bartlett, the hero in her books Pip Bartlett’s Guide to Magical Creatures and Pip Bartlett’s Guide to Unicorn Training. One of her dogs provided the model for the unicorn Regent Maximus, who is scared of everything—including the color blue. She also has a blind foster dog that, in contrast, doesn’t let anything hold her back. Jackson had a lot of fun coming up with magical creatures in her book, including the Hobgrackle, the Miniature Silky Griffin (inspired by an actual animal called the Miniature Silky Fainting Goat) and the Fuzzles, who have a nasty habit of catching underwear on fire. Fifty lucky kids got a free copy of Pip Bartlett’s Guide to Magical Creatures, which Jackson Pearce signed after the events. 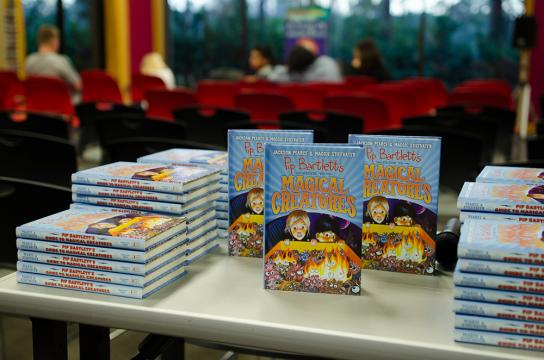 Jackson Pearce also spoke with students from Montessori of Winter Garden Charter School and Renaissance Charter at our Winter Garden and Chickasaw Branches. Cash and Ian, two students from Montessori, and Axel and Fatima, from Renaissance Charter, introduced her at these events. Her last day in Orlando, she held a writing workshop at our West Oaks Branch. Twenty-seven kids and teens brainstormed writing ideas, made “spider maps” to flesh out their ideas. “There are no dumb ideas,” she emphasized, “After all, someone made millions off of a sponge wearing square pants.” She challenged the kids to do one thing: “Finish something. You don’t have to finish everything you write, but you have to finish at least one story or novel that you work on. Make yourself get to the end.” Jackson Pearce started writing her first book when she was nine years old. Her first book was published when she graduated from college. “I couldn’t have written that book, if I had not tried to write a book when I was nine, or if I had not written a novel in high school. Each book led to the next.”

books
sunshine state author series
children's
YA books
Comments and postings by library patrons do not necessarily reflect the official position of OCLS or its staff. All comments and posts are public records. Patrons are strongly encouraged to protect their privacy when commenting or posting on social software tools.
About