Melrose in the Mix 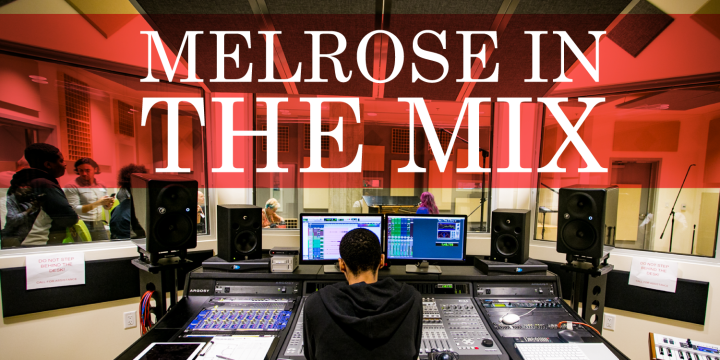 Melrose in the Mix is a live recording session held regularly in the Melrose Center. The series began in April 2017 with a session by Swamp Sistas, a society of women singer/songwriters led by popular roots musician Beth McKee. Since then we’ve hosted 17 sessions, with acts ranging from local hip-hop standouts E-Turn and Sean Shakespeare to beloved Americana singer-songwriter Terri Binion to the classical guitar and oboe duo Belt & Ramirez.

The concept brings together three separate elements to make one singular, special event. First, we reach out to local popular musicians and offer to record them in our Audio Studio, performing about 30 minutes of original material. Secondly, we invite the public to attend the performance where they can be part of an intimate audience watching the live recording session as it happens; each session can accommodate up to 24 audience members. Lastly, we give Melrose Members who have gained credentials to use the Audio Studio the opportunity to assist with the engineering of the session under the guidance of Melrose Center staff. The results are often magical and always entertaining.

“…one of the city’s most engaging live-music experiences.”
– Bao Le-Huu, Orlando Weekly

Our 2019 Melrose in the Mix season kicked off the first weekend in March with two sessions. That Saturday, local band Artefacto blended nuances of alternative rock, pop and electronic music, performing a clutch of powerful songs sung in Spanish. The following day, veteran Orlando singer/songwriter Marc With a C played solo versions of some of his older classics for his loyal fans. Marc’s session will be released as one of the vinyl sides on his upcoming triple album career retrospective. In April, we welcomed critically-acclaimed folksinger John John Brown, as he performed some songs from his latest album as well as his current project, New York Photo Songs. And this month, Beth McKee, accompanied by her Funky Time Band, played some of her critically-acclaimed music tinged with elements of soul, gospel, blues and rock for another lucky studio audience.

Interested in attending the next Melrose in the Mix? You can save a seat by registering at ocls.info/melroseinthemix. Twenty-four seats fill up quick, so don’t wait!

melrose center
melrose in the mix
library staff
music
Comments and postings by library patrons do not necessarily reflect the official position of OCLS or its staff. All comments and posts are public records. Patrons are strongly encouraged to protect their privacy when commenting or posting on social software tools.
About