Beginning at 7 a.m. on Sunday, June 13, we will be performing maintenance that may cause you to not be able to access library websites, including the catalog and your library card account. We anticipate the maintenance window to last no more than two hours. 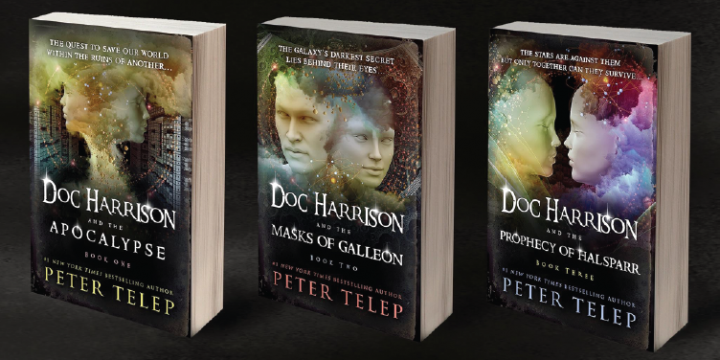 Peter Telep is a #1 New York Times bestselling author, who has penned more than 40 novels and has collaborated with legendary author Tom Clancy. He is a film and television writer and has worked on many television, film and video game tie-ins such as Wing Commander, Splinter Cell and Ghost Recon. He also teaches fiction writing, script writing and video game writing at the University of Central Florida. Staff member Cristina spoke with him to discuss his new books and ask about his writing process.

Cristina: In Book 1, Doc is a 16-year old kid, who is not only suddenly thrown into the middle of a dangerous adventure, but also discovers many dark secrets about his father. By the third book it’s safe to say (no spoilers!) that he’s grown into a pretty efficient leader. Tell us, how was it for you writing his arc through the series?

Peter: I think when you’re working on a coming-of-age tale, one of the more satisfying pleasures is to throw obstacles in your character’s path with the intent to show growth, wisdom, and experience. Even when your character fails, the lessons learned are valuable and teach lessons. In fact, I think characters learn more when they fail than when they succeed, so perhaps you should create a series of escalating failures that lead toward a final victory, ha ha! In the case of Doc Harrison, there’s a sobering maturity that forms in Doc’s heart as he realizes the price of courage, true friendship, and devotion to a cause. I thought the ending of the third book would be a lot more cheerful than it actually is, and yet I needed to be truthful to the characters and situations.

C: One of my favorite characters in the Doc Harrison series is Tommy. You’ve written lots of military dramas and have done years of research in your field. How does that influence Tommy’s story in the books?

P: Since I’ve spent a lot time around professional soldiers and have been trained by them, Tommy was an easy character to create. He’s a combination of a lot of friends I’ve met over the years, with a pure heart, an unflappable devotion to his country, and a sincere desire to help Doc develop into a mature and responsible adult, despite the insane situations that literally explode around them. I also thought it’d be great fun to take a good 'ole boy Southern Marine Corps officer and place him in a group of rather hip, young high school kids. There’s a sharp juxtaposition between Tommy and the others, and that makes him stand out even more as a character. I made this decision rather unconsciously at the outset, knowing I wanted an Obi-wan type character but not realizing how important Tommy would become to the story and Doc’s life.

C: There is such a unique group of characters in the books. Some are even (SPOILER ALERT) animals with special powers. I don’t want to spoil too much, but the Grren stand out as favorites. How did you manage to create such a variety of beasts and even plants from other worlds?

P: I wish I had a conscious process I could share with you, but much of the world of Flora just sort of came to me as I went along. I wanted to show a parallel between Flora and Florida (hence the name), and then I thought "Okay, I’ll do something similar to E.T.’s botanical planet because I like that and can have some environmental themes resonating beneath the surface of the story." Once I had that idea in place, I began brainstorming flora and fauna that would live on such a planet. I do really like the cat-like monsters in the Chronicles of Riddick film, and I think they served as a strong inspiration for the grren. Many other plants and creatures in the books all came about based on the planet and this idea that perhaps all creatures have a wreath that can produce a persona, which is the alien-like avatar concept we explore in all three novels. So in sum, as I began to think about the world, the plants and animals began to suggest themselves to me. 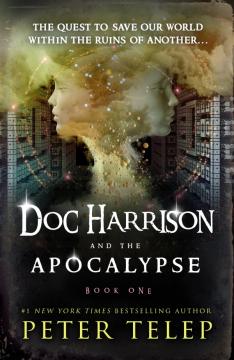 C: There’s a lot of humor in the novels, especially with characters like Keane. And even he has moments that are just heartbreaking. How challenging was it for you to balance comedy and drama in this series?

P: Admittedly, it is difficult to balance humor and serious drama in any piece. One trick I always use is to consider the narrative time in the story and how “far” we are from a serious moment before I insert humor. In most cases, you can’t have someone die, and then a chapter later, have someone making snarky remarks and everyone laughing as though nothing ever happened. There’s a cooling off period between the super heavy drama and the light humor. I do love to have characters comment on the irony of a situation or remain sarcastic, which can still play well against a serious moment. Keane is a character who, quite remarkably, starts off as one of the most depressed kids in the group, and yet as the story continues, he begins to turn into the guy who wants to cheer people up. That’s a pretty remarkable change, and it’s because he’s found a group of friends that he really cherishes, and that care and concern has mended his heart and opened him up to a world of possibilities.

C: Tell us a bit about your writing process. What is your personal strategy to bring words to paper? I’ve heard peanut butter is involved!

P: Yes, peanut butter is the real key to creativity! Seriously, I try to write five days a week and treat it like a regular job. Even if I write just two pages a day, I can say I’ve written something. I try to set weekly page counts and monthly page counts in order to finish projects on time. I always give myself a deadline and try to stick to it. I begin each day with coffee and peanut butter (my enablers) and reread what I wrote the day before. After revising the old pages, I begin writing new ones. I always observe what makes me most creative: a particular room, chair, song, whatever. Set deadlines and rely upon your “writing enablers” to create an atmosphere of creativity and productivity.

C: Any advice to future writers, especially new writers who want to jump in the science fiction genre?

P: Well, a lot of people talk about being writers and talk about story ideas. The only way you’ll ever achieve that goal is to sit down, write the pages, and keep doing that until the project is finished. In regards to science fiction, writers should research the marketplace to consider story ideas and where they might send their stories for possible publication. Write short stories to hone your craft and then move on to novels when you think you’re ready to take on a big project. You can publish some short fiction first, and then once you have a novel written, you can query agents by saying you’ve already published some stories. That looks really good and shows you’re on a trajectory. Also, it’s easy to take big risks in short fiction; if you have to toss a story, you’ve only abandoned 18 pages or so instead of 400, which can be truly heartbreaking. Finally, discipline is remembering what you want, so if you want to be a writer, then write as much as you can and never give up your dream.

Telep will be discussing his latest science fiction project, the YA book trilogy Doc Harrison on Monday, December 11 at 6:30 p.m. at the Chickasaw Branch. A book sale and signing will follow the event.

author interview
author
local author
writing
YA fiction
science fiction
Comments and postings by library patrons do not necessarily reflect the official position of OCLS or its staff. All comments and posts are public records. Patrons are strongly encouraged to protect their privacy when commenting or posting on social software tools.
About