An Interview with Margarita Engle 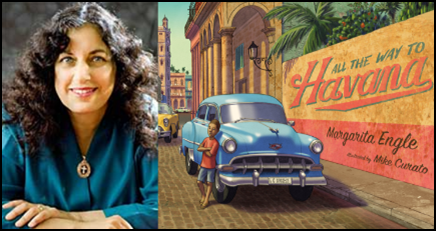 Margarita Engle is a multi-award winning, Cuban-American author of children, teen and adult literature. She is the reigning Young People’s Poet Laureate and is the first Latino to be chosen for the prestigious honor. For Hispanic Heritage Month, Margarita Engle, along with illustrator Mike Curato, will be visiting our Chickasaw Branch to talk about their new book, All the Way to Havana. Before her visit, I spoke with Margarita about her new book and her personal connection with Cuba: its heritage, people and literature.

Stephanie: How did you and Mike Curato come to collaborate on All the Way to Havana?

Margarita: This is such a good question, and the answer is surprising. Mike Curato and I probably have one of the most unusual author/illustrator relationships in the entire history of children’s literature. It all traces back to the editor, Laura Godwin. She asked me if I would write a story about a boy and his family car, set in Cuba. I don’t know anything about cars, so I hesitated, but I love Mike’s illustrations, so when she told me he would do the artwork, I agreed. Then Laura asked me to meet Mike for coffee in Havana. I had just returned from Cuba, and couldn’t go back again so soon, but I offered my cousin’s bed and breakfast as a place for Mike to stay. If he hadn’t made that research trip, the illustrations would still have been beautiful, but since he did go, the art is also completely authentic. Basically, I now think of Mike as family. He is definitely an honorary Cuban.

S: The book is about a family traveling to Havana in a car named, “Cara Cara,” which seems to have a personality of its own. What does this personification represent to the family?

M: Any car that is more than half a century old will develop its own quirky personality. Most of the “classic” American cars in Cuba make noises that we might describe as “putt putt” in English. For this reason, they are sometimes called cafeteros, because they sound like stovetop percolator coffee pots. Since I didn’t think children would know what a percolator is, I decided to use the cluck cluck of a hen, which is always shown as "cara cara" in Spanish. Chicks say "pío pío," so I used that too, but I didn’t think the powerful kikirikí of a Spanish-speaking rooster would suit such a tired old car, so I left that out. Basically, the car in this story is a family member, because no one in Cuba can afford to replace an old car with a new one. In fact, most people still depend on overcrowded buses and horse-drawn vehicles. By writing this story, I wanted to honor the ingenuity of poor people everywhere, who keep their old possessions working through sheer determination and perseverance, along with a bit of duct tape and wire.

S: You said once in an interview: “In general, my picture books are either about people who dared to try something original, or about animals, and the things we can learn from them.” Which one of these topics is represented in All the Way to Havana?

M: Two words used every day in Cuba are resolver and inventar. The first means solving problems, and the second is inventing solutions to problems. Everyone who keeps one of those old cars going does it by daring to try something new. Parts under the hood are rarely original. Some are Russian. Others are homemade. Cars might even have boat engines! Motorcycles often use washing machine engines. There is no limit to the experimentation done by self-taught mechanics in Cuba. In this sense, it is a book about grass roots scientists. Try this, try that, observe the results, see what works.

S: As a Cuban-American writer, how important is it to create inclusive literature for children and teens?

M: Oh, I don’t think there is any excuse for the pathetic statistics coming out of CCBC studies. By now, after decades of acknowledgment of the need for inclusive books, there should already be a marvelous array—a feast from which young readers of all backgrounds could sample various cultures, countries, and styles of writing. I think inclusiveness is just as important for people in less diverse communities as it is for those in amazingly diverse ones. Americans in general, both young and old, need to cross geographic and cultural borders in our reading. We need to learn about the world.

S: For many people, especially young people, Havana is a place they only see in pictures. How can they learn more about the rich history and cultural aspects of Cuba?

M: Cuba is such a close neighbor to the U.S., every bit as close as Canada and Mexico. If only the peacemaking process could be completed, so that neighbors could truly be described as friends. In the meantime, despite all the political and economic challenges, books can take us traveling. I hope that my own historical verse novels, and my verse memoir, Enchanted Air, will contribute in some small way to satisfying the curiosity of young readers who want to know more. I would also recommend books by other Cuban-American authors, especially the memoirs of Alma Flor Ada. I’m afraid I have to recommend caution when it comes to books about Cuba written by outsiders who don’t understand the complexity of the island’s history. There is often a tendency to oversimplify, and I think those books do more harm than good.

An Evening with Margarita Engle and Mike Curato will take place on September 13, 6:30 p.m. at the Chickasaw Branch. The event is presented by Writer’s Block Bookstore.

author interview
book recommendations
hispanic heritage month
children's books
diversity
Comments and postings by library patrons do not necessarily reflect the official position of OCLS or its staff. All comments and posts are public records. Patrons are strongly encouraged to protect their privacy when commenting or posting on social software tools.
About