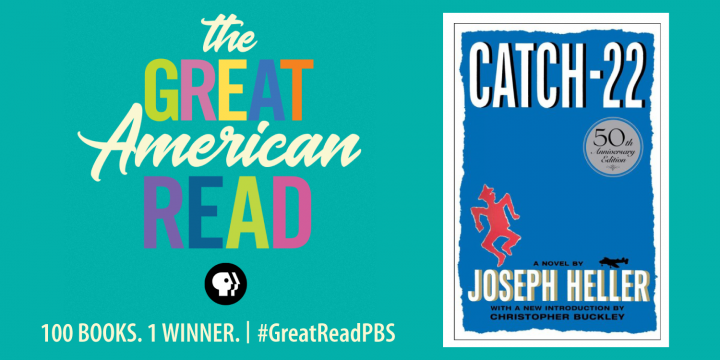 In 2011, Joseph Heller’s Catch-22 celebrated its 50th year in print. It’s no surprise that such a book, the title of which has transcended literary connotations to become common parlance, has appeared on PBS’s The Great American Read list.

Like many classics, particularly satires, the book is often used as a lens through which to view our current moment. When it was first published in 1961, the novel’s World War II setting was seen as holding a mirror to the escalating “conflict” in Vietnam. It was and has been popularly viewed as an antiwar novel.

By 2011, the “Global War on Terror” had become quotidian, relegated to background noise. Despite the analogy between the drones of today and the bombardiers in the book, the majority of critics heralding Heller’s novel were silent on the faraway horrors of modern warfare. Even a report from the BBC, in which soldiers who fought in Iraq and Afghanistan attest to the novel’s keen portrayal of working within an absurd military bureaucracy, comes across as tame. Why did these articles, 50 years later, fail to have any political bite? Perhaps it was because Catch-22, as many sharp critics have pointed out, is less an antiwar novel than a satire of institutional absurdity, its themes applicable to a variety of settings, from the battlefield to the boardroom.

Catch-22’s central conflict is that its protagonist, Yossarian, a WWII bombardier, does not want to risk his life flying bombing missions. He hopes to be declared unfit to fly due to being insane, but, as army doctors point out, anyone who does not want to fly deadly missions must be sane. And thus Yossarian is forced to fly an ever-increasing number of missions. He’s captive to an absurd system of rules recognizable to any American who has dealt with the healthcare system, student loans, home loan discrimination – need I go on?.

I first read Catch-22 in 2004, in an undergrad lit class that demanded four papers analyzing four novels through different theoretical lenses. I suppose in theory it was a good brain exercise to elucidate the Marxist undertones in Roddy Doyle’s The Snapper, or to shoehorn Chinua Achebe’s Things Fall Apart into a Lacanian psychoanalytical framework, but in practice, it often felt like I was producing the same BS I’d sought to avoid by choosing to study literature over, say, advertising. Point being, by the time I arrived at Catch-22 I was utterly confused and sick of reading books.

But Heller’s novel seemed impervious to theory (satire tends to be upfront about its message). I was able to read the whole thing without thinking about what aspects of the book I might warp into an A+ essay. I was immediately drawn in by the book’s irreverence, its willingness to be silly despite the serious subject matter.

I’m happy to report that, on a craft level, the book holds up. The dialogue remains snappy and funny. The repetitive structure of the book works wonderfully to create a sense of futility. That said, I honestly think the book is couple hundred pages too long. And that said, I’ve grown up in a time when irony is so deeply embedded in culture that a child could point it out on a cereal box, so I can see how those reading Catch-22 in 1961 would have wanted to lose themselves in its eddies.

The book’s pacing and tone achieve utter farce, despite coming off as a bit clunky when it zooms in on the ultra-dark moments of combat and suffering, but this attempt to balance the absurd with the human makes Catch-22 exceptional, if uneven at times. To this point, I’m not sure pure satire, in literature at least, resonates the same way it might have in 1961 – not in a culture where trucks are sold as “revolutions,” the phrase “late capitalism” is a meme, and absurdist tropes can be spotted in deodorant commercials. So I read Heller’s attempts to evoke real, three-dimensional people within the crushing system of military protocol as both prescient and admirable, a good case study for future satirists who might hope to criticize institutions without sacrificing character to satirical genre conventions.

It is now, somehow, 2018. I can’t help but wonder what the reception would have been like if Catch-22’s 50th birthday was this month, or any month during this chaotic presidency. Recently the phrase has reemerged, unprompted, in recent political coverage: one writer for The New Yorker argues that the current president’s brain operates like a catch-22; another from The Boston Globe compares him to Heller’s character Milo Mindbender, the solider-cum-war profiteer who puts his company before his country.

The kakistocracy that orchestrates the absurdity in Catch-22 is right now manifest in the United States government. In such a dire situation, the question implicit in Catch-22’s placement on The Great American Read list – “Through what lens might we view the novel in 2018?” – is preempted by a more pressing question: Can literary satire make a difference? Can it even make a splash in our shallow, noisy cultural landscape?

My hopeful answer is yes, with the caveat that literature is neither a quick fix, nor a direct call to action. Art brings us joy, shows us beauty and speaks truth to power (all clichés but all true nonetheless). I subscribe to the idea that, as activist/musician/director Boots Riley put it in a recent New York Times profile, art “tills the soil and gets people ready” for direct political action.

Literature tills its fair share of soil; it’s just often slower to take root. Catch-22 is the perfect example. The novel is still fresh and funny, institutional bureaucracy has not gone away, and while both of these points help make the novel relevant, there is a subtler message in the book, a way of reading it that may instruct us in these chaotic times. This interpretation goes back to 1961, when Catch-22 debuted to mixed reviews (and a print run of 7,500, by the way), when Robert Brustein reviewed the book for The New Republic, writing:

“Finding his absolutes in the freedom to be, in a world dominated by cruelty, carnage, inhumanity, and a rage to destroy itself, Heller has come upon a new morality based on an old ideal, the morality of refusal.”

What does Yossarian do in the face of a cruel and inhumane world? Initially, he resists flying missions. He attempts (and fails) to evade his duty. But ultimately (spoiler alert) he defects from the military to escape the vicious cycle of bombing missions. In short: he refuses.

Refusal is yet another tool – like voting, registering others to vote, writing to/calling politicians, marching, divesting, and donating to causes – in the resistance toolkit. One might be forgiven, amid the chaos, for missing the recent news stories of refusal in response to the government’s child separation policy: airlines refused to transport migrant children separated from parents; governors refused to send National Guard troops to the border; an ICE spokesman resigned, refusing to spread falsehoods about the policy. Perhaps the only reason we haven’t seen mass resignations from ICE and border patrol is because refusal is not a decision made lightly. Our complicity in systems of oppression is often tied to our livelihoods. But as everyday life becomes more of a farce, I would not be surprised to see more people exercising their power to say no at their own personal risk.

In Catch-22, the message of refusal is not presented pedantically; rather it is implicit in Yossarian’s character and the novel’s narrative arc, awaiting a receptive reader like a seed awaits the rain. Today’s readers might ask, what took Yossarian so long to act? Why did he wait until things got really bad? In the thick of 2018, we might ask ourselves the same things.

great american read
guest writer
books
book recommendations
Comments and postings by library patrons do not necessarily reflect the official position of OCLS or its staff. All comments and posts are public records. Patrons are strongly encouraged to protect their privacy when commenting or posting on social software tools.
About