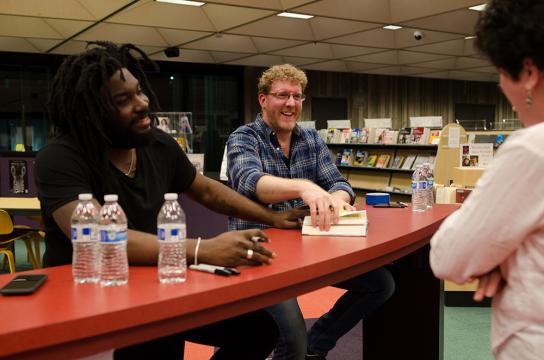 “We can’t be more loyal to our fears than our futures,” said Jason Reynolds, co-author of All American Boys, during a truly inspirational talk at the Orlando Public Library. He and co-author Brendan Kiely visited Orlando as part of the OCLS Sunshine State Author Series. The authors spoke at two Orange County libraries, two OCPS high schools, and held two writing workshops over the span of three days. The award-winning writers discussed the sensitive topics of police brutality, racial tension, and the power of social media within their book, All American Boys. They decided to collaborate on the novel out of a shared need to respond to the shooting of Michael Brown in Ferguson, Missouri. It took them only six weeks to write, with Jason writing the part of Rashad Butler and Brendan the voice of Quinn Collins. They wrote in secret, not knowing if the novel would be commercially viable.

Reynolds and Kiely made stops at Edgewater and Oak Ridge High Schools, sparking a conversation with over 250 students about racial justice, privilege and the power of the written word. Some lucky students received signed copies of All American Boys, plus the chance to sit down and talk with the authors. 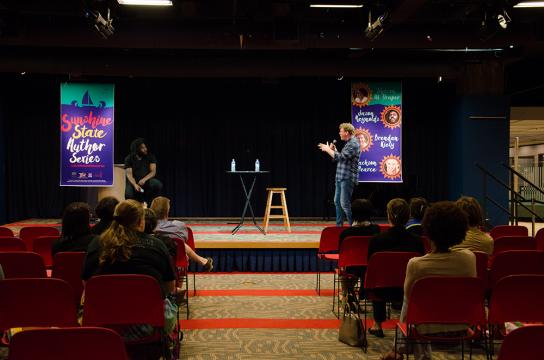 Reynolds also held a teen writing workshop where he told attendees the real story of how he became a writer despite never having read a book until he was about 17 years old. He talked about his initial dreams to become a poet as he was more inspired by hip hop and song lyrics. Lastly he spoke about the realities of becoming an author and the importance of finding your own voice amongst the pages. Teens were enthralled by Reynolds’ story and peppered him with questions. Reynolds closed out the session with some writing prompts for teens to work on at home. 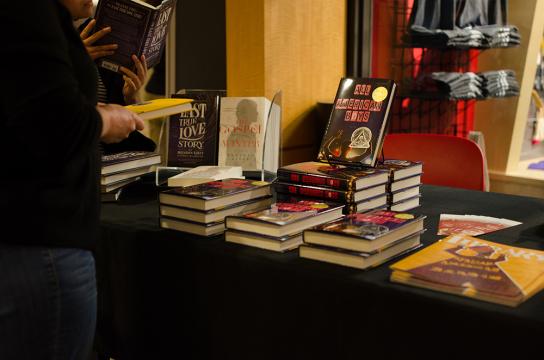 Don't miss out on your chance to meet award-winning author Jackson Pearce, this month, as part of our Sunshine State Author Series.

The OCLS Sunshine State Author Series is sponsored in part by the State of Florida, Department of State, Division of Cultural Affairs, and the Florida Council on Arts and Culture.

sunshine state author series
YA books
teens
Comments and postings by library patrons do not necessarily reflect the official position of OCLS or its staff. All comments and posts are public records. Patrons are strongly encouraged to protect their privacy when commenting or posting on social software tools.
About

OCLS
@oclslibrary
Shopping for the book lover in your life? Check out this round up of the best bookish socks! https://t.co/cKUv4q0jkF
6 hours 8 min ago

OCLS
@oclslibrary
TIL: A rare blue bee previously thought to be extinct was recently seen in Central Florida, after having been missi… https://t.co/tMUeLOG3Oh
8 hours 49 min ago

OCLS
@oclslibrary
Calling all Pokémon trainers! This December, we'll have virtual events all around your favorite Pokémon. From virtu… https://t.co/AdngLfZZ4o
11 hours 18 min ago