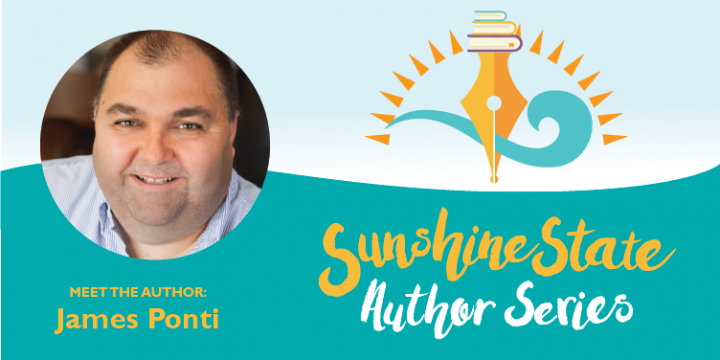 Local author James Ponti continues the momentum for the Orange County Library System’s Sunshine State Author Series with an author event on November 18 at our North Orange Branch, followed by writing workshops at the library’s West Oaks Branch and South Trail Branch on November 30 and December 6 respectively. Library staff member Lorrie Taylor got a few minutes with her recently to ask her some questions about his work.

Lorrie Taylor: Framed! is the only book on both the 3rd-5th grade and 6th–8th grade Sunshine State Young Readers Award (SSYRA)  lists this year. Why did you choose to make Florian and Margaret “regular” kids?

James Ponti: I want kids who read Framed! to find out about regular kids who end up in extraordinary situations. We talk about how great it is to get lost in a book but really it’s about being found in a book.  Florian and Margaret are observant and thinking young people; they don't have the random background knowledge of a Sherlock Holmes character. It's important for Florian to solve Margaret's story and not tell it to her. The book is about their friendship most of all.

LT: Tell us about the T.O.A.S.T. (theory of all small things) method.

JP: T.O.A.S.T. was developed at the airport. To pass time while waiting, I would try to figure out things about people. It is amazing how much we visually project about ourselves. Try it yourself. Lots of kids talk to me about playing T.O.A.S.T. I enjoy hearing specific examples as well as hear that kids are actually making a game with rules out of it. Anyone can do it.

LT: You have written and produced TV shows –how is this different from writing a novel?

JP: When I was young, I was a reluctant reader but wanted to be a writer, so I went to college to become a screenwriter and worked in film and TV for Disney, Nickelodeon, and PBS. TV/film writing is mostly dialog and with novels I often use the first person which is similar to writing dialog. After I got into production, I was happy that there is no budget to consider in a novel. Florian and Margaret from Framed! can go to the White House, a museum or travel anywhere and I don’t have to come up with a budget to fund it.

LT: What advice do you give to readers?

JP: We are in a golden age of juvenile and young adult literature. There is so much diversity, just find a couple of books in your interest area and keep reading. Anyone who is reading will do better in life. The secrets of the world are found in books.

LT: And what would you say to a young person who wants to be a writer?

JP: There are false perceptions that writers are sophisticated people from NYC, Boston, or Ivy league schools. John Green is from Winter Park. Kate DiCamillio is another wildly successful local Florida author who went to public school. Writing comes from everywhere; all it takes is a voice and everyone has that. You will be a better writer if you read. One of the most surprising things I've encountered as an author is developing friendships with many other authors I meet at events and on the road.

LT: When do you write?

JP: I often write in my mind while in the car. I'm thinking and solving plots. When I get home, I write it all down.

JP: Vanished was just released on August 22. We visited six different schools that day and ended at a bookstore. It's my first book that received a Kirkus starred review. It's set in Washington D.C. at places such as the White House and Kennedy Center but focuses on the prep school that the president's daughter attends.

I just turned in the third T.O.A.S.T, which is set in mostly school libraries in Florida and Texas. The librarians are the suspects. It should be out in September 2018. There's a new series about a group of kids who fall through the cracks in society and are recruited to be a part of a top-secret team scheduled to be out in 2019.

I also have a YA novel in the works about a murder in a high school. A student investigates because he is the sheriff's son and identifies the body. As he overhears information and gossip at school, he pieces together what happened.

sunshine state author series
author interview
YA books
YA literature
Comments and postings by library patrons do not necessarily reflect the official position of OCLS or its staff. All comments and posts are public records. Patrons are strongly encouraged to protect their privacy when commenting or posting on social software tools.
About