What are the plans for opening a library in Lake Nona and Horizon West?

OCLS Plans for Expansion in Horizon West and Lake Nona 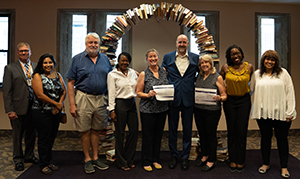 On June 9, the Orange County Library System Board of Trustees approved leases for new library branches in both Lake Nona and Horizon West.

In Horizon West, the library will have a ground lease with Orange County that will allow for the design and construction of a library in the Horizon West Regional Park. The library will design and construct a 20,000 square-foot building and outdoor pavilion that will share parking and outdoor space with recreation and community facilities operated by the county. In Lake Nona, the city of Orlando will design and construct the Lake Nona Branch as part of the new Southeast Government Center to be built on Dowden Road. The facility, which will also feature shared outdoor space and a stage, will be leased to the library upon its completion, with an option to purchase the building at a later date.

“Now that these leases have been approved, we have a clear path forward in both Lake Nona and Horizon West,” said Library Board of Trustees President Crockett Bohannon. “I want to thank the city of Orlando and Orange County for working with us to make it possible to begin work on both branches at the same time. This has been a long road and a lot of hard work, but I’m proud of what we have been able to accomplish. I’m happy to tell the people living in Lake Nona and Horizon West that they have libraries on the way.”

In July 2021, the library announced that it was working with the city and county on a plan to build these branches. The leases signed this week are the culmination of a collaborative effort to work toward a creative solution that would allow the library to fund and construct two branches in the same time frame.

On November 17, Chief Branch Officer Danielle King participated in Commissioner Nicole Wilson's Horizon West Town Hall to keep the community up to date on the plan to build a new branch in Horizon West. View her presentation.

During the July meeting of the Board of Trustees, the City of Orlando and Orange County presented a concept that could help Orange County Library System begin work on both the Lake Nona and Horizon West branches. The Trustees voted to work with the city and county to pursue the concept, which will need to be approved by both the City Council and County Commission. More details are available in the July Board of Trustees meeting.

OCLS has entered into an agreement with Hamlin Retail Partners, LLC (known as Boyd Development) to place a drop box free of charge on their property in Horizon West. The drop box will be located in Hamlin Town Center on Shoreside Way. Having a drop box in Horizon West will give residents of the community a more convenient way to return library materials that they borrow from other locations or have delivered by our Books by MAYL service. The goal is to have the drop box in place by the end of summer/beginning of fall.

If you would like to learn more, review the agenda for upcoming meetings please visit the Board Meetings and Minutes page on our website.

In October 2020, members of the Orange County Library Board of Trustees toured two parcels of land in Horizon West that are owned jointly by the City of Orlando and Orange County. The parcels have been offered for sale to the library for the potential development of a library branch. During its November 12, 2020 meeting, the board selected one of the parcels for further exploration.

At the November meeting, the board also heard from some residents of Lake Nona, who are interested in seeing a library developed closer to their growing community. The Library Board of Trustees and the library’s administration have been looking for opportunities to build in Lake Nona for several years now. Library representatives have met with Tavistock, which previously offered to sell the library a small piece of land at market value. The parcel was not large enough to run a library facility that would offer the same services the library provides at other branches, unless the library were to construct a two-story building. OCLS only operates single-floor library branches because they are more cost efficient. Adding a floor would require additional staff to tend to those floors, and doing so significantly increases both construction costs, as well as our operating costs now and into the future. There were other conditions with that offered parcel in addition to the price that made it unsuitable for a branch. Commercial property rental in Lake Nona is about $45 per square foot, which is more than double what the library pays at other locations.

The library has also been in communication recently with the City of Orlando about the possibility of including a library at the site of a government center being considered for Lake Nona. City officials were working with the Greater Orlando Aviation Association (GOAA) to enter into an arrangement to develop the land. City officials have not yet indicated what the cost would be to the library to be involved in the project if it were to move forward. The situation was discussed at the board’s August meeting.

As such, the library has yet to find a cost-effective solution in Lake Nona that will make it possible to build a library that is affordable and efficient, and that the community can enjoy for years to come.

The library’s budget can only accommodate the construction of one new location at a time. At this time, a parcel of land is readily available in Horizon West. As the library moves forward with plans in Horizon West, the administration and board will continue to look for opportunities in the Lake Nona area.

In the interim, the library intends to place a drop box on the Valencia campus in Lake Nona, to give residents of the community a more convenient way to return library materials that they borrow from other locations or have delivered by our Books by MAYL service. The goal is to have the drop box in place in six to seven months.

We are looking at two potential library sites in Horizon West which are jointly owned by the City of Orlando and Orange County. We recently received permission to begin land evaluations to help us determine the number of buildable acres on each property. After the report is delivered, we will determine which property to purchase and proceed with negotiations. The purchase will need to be approved by both jurisdictions and the Library Board of Trustees. After approval, we will work with an engineering firm to complete site surveys. We will then proceed with an architect to draw up preliminary layouts, adjacencies and square footage.

We are interested in opening a library in Lake Nona, but we have not yet identified an appropriate location for a branch. While we move forward with plans to build a library in Horizon West, we will continue to look for opportunities in the Lake Nona area.

Questions? We can help!