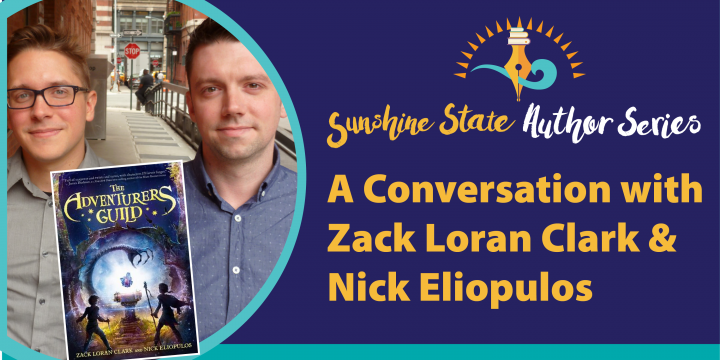 Zack Loran Clark and Nick Eliopulos are the co-authors of The Adventurers Guild, winner of the Sunshine State Young Readers Award for grades 6–8. The Adventurers Guild tells the story of two best friends as they battle monsters to protect one of the last surviving cities in the world. Zack and Nick will visit the Fairview Shores Branch on Tuesday, October 29, 6:30 p.m. for a special Meet the Author event and book signing. Staff member Stephanie Lum had the opportunity to speak with Zack and Nick about their love of gaming and how this influenced their writing.

Stephanie Lum: What made you decide to write a book? Did you always enjoy writing, or did it grow on you?

Nick: We’ve always been writers, and storytellers more generally. We were the kids who were constantly doodling in class, not out of disrespect or boredom, but because we had these vast imaginary worlds inside of us that needed expression. Writing a novel takes real discipline, however, and we both had several false starts over the years before we finally decided to team up.

Zack: That love of storytelling is also what drew us to gaming, and one of our favorite games of all time is Dungeons & Dragons. At its core, D&D is a cooperative storytelling game. We wanted to bring that spirit of a shared narrative to our series.

SL: Who were your reading/writing influences growing up?

Zack: I tore through pulpy paperback horror series like Goosebumps and Scary Stories to Tell in the Dark. (Certainly, my appreciation for creepy monsters has bled into The Adventurers Guild!) Another of my favorites was Animorphs. On its face, it was fluffy scifi kid-bait, but the series also had this gripping emotional depth that surprised a lot of readers.

Nick: I read everything I could get my hands on as a kid, but comic books were my one true love. I spent every cent of my allowance on Marvel and DC comics, and when my allowance was gone, I still managed to spend hours poring through the back-issue bins at my local comic shop. Those older issues were sealed tight, but the covers were so evocative that I was able to entertain myself by imagining their contents.

SL: The Adventurers Guild alternates between the voices of Zed and Brock. What made you decide to write the book this way and what was the writing process like between the two of you?

Nick: We took direct inspiration from D&D on this point. One of the things that immediately drew us to that game was that we each got to make our own heroic protagonist – complete with detailed backstory and motivation – and then we threw those protagonists together into a shared story. We thought that alternating POVs – with each of us “owning” our own character’s viewpoint – would be the best way to replicate that gaming experience as a writing process.

Zack: But even though our chapters alternate between Zed and Brock – that still meant both of us were writing all the characters at some point – including each other’s. Nick added so many interesting layers to Zed that I never would have thought of. And if Brock has a short fuse, that’s definitely my fault. It was a real treat to see the characters branch in ways that surprised me.

SL: Is there a character from The Adventurers Guild that you really enjoyed writing? Was there one that was more difficult?

Zack: I think we both loved Alabasel Frond, the leader of the Adventurers Guild. She really became the standout character of the first book. She starts out as this sneering, spitting, almost villainous figure for the kids, but by the end of the story they discover a core of intense devotion to her city – and to them. She’s also hilarious.

Nick: The character I found most challenging to write is a bit of a spoiler. I’ll just say that in book three, one character is not who they appear to be. And writing them in a way that would make the situation obvious to readers but not obvious to the other characters was tough, but also fun. Zack really kept me on my toes with some of his plot twists – I didn’t see all of them coming!

SL: What advice would you have for a young person who is interested in writing?

Nick: Make it social. Writing is usually a solo enterprise, but the best way to improve is to share your writing and see which parts people respond to. Find a friend or friends who also like to write, and swap with one another.

Zack: If you’re interested in writing, then honestly the best advice I can give is to roll up your sleeves and do it! Tell spooky stories. Write sappy love poems. Draw nerdy comics. Explore different kinds of storytelling. The more you write, the better your writing will become.

SL: What is your fondest memory about growing up in Florida?

Zack: I’m very lucky in that I got to keep some of my favorite parts of Florida even after I moved away. My friends, like Nick, remain such a big part of my life. I do miss being warm in the winter, though!

Nick: Along with my aforementioned visits to the comic store, I also have fond memories of weekly trips to the public library with my mom and my brother. My mom claims that the only time I ever threw a tantrum as a kid was when we went to a bookstore and, thinking it was a library, I expected to walk out with a big stack of books. I just couldn’t fathom that I wasn’t allowed to take them all home with me.

SL: What books are you currently reading?

Nick: I’m reading Silver in the Wood by Emily Tesh and Scott Plagenhoef’s If You’re Feeling Sinister, a non-fiction book about one of my favorite bands, Belle & Sebastian. Plus a couple manuscripts we’ve been asked to blurb, and, of course, a bunch of comic books. Lately I can’t get enough of Unbeatable Squirrel Girl or Rainbow Rowell’s Runaways.

Zack: I’m reading lots of exciting stuff for my day job as an editor that I can’t really talk about – boo – but am also jumping between two great fantasy series for grown-ups: A Land Fit for Heroes by Richard K. Morgan and The Dagger and the Coin by Daniel Abraham. Also, some fun comics Nick leant me!

SL: What are must-eats when it comes to gaming snacks?

Zack: Pirate’s Booty is one of my favorites, but I have a problem where I eat through it compulsively without realizing what I’m doing. Usually there comes a point in the game where I ask Nick to take them from me . . . then am startled to discover I have the bag in hand again 20 minutes later.

Nick: I was going to say Pirate’s Booty, too! Or at least the dust at the bottom of the bag once Zack’s through with it.

SL: When you’re not writing or gaming, what other hobbies and activities do you both enjoy?

Nick: There are almost too many options in New York. I’m a homebody at heart, but I still like to get out for concerts, plays, and dance performances. And museums! Zack and I went to the opening party for a Tolkien exhibit at the Morgan Library earlier this year, with live music and costumes. (He was an elf; I was a hobbit.)

Zack: I don’t know if she counts as a hobby, but I have a delightful dog who I take to the park on weekends. I also try to keep in shape with exercise. Maybe I should pick up a hobby. Nick, what would you suggest?

Nick: I just wish you could do half my chores like you write half my books!

sunshine state author series
books
children's books
author interview
Comments and postings by library patrons do not necessarily reflect the official position of OCLS or its staff. All comments and posts are public records. Patrons are strongly encouraged to protect their privacy when commenting or posting on social software tools.
About

OCLS
@oclslibrary
Is it time to replace that Nook you got back in 2010? Here's how to responsibly recycle it. https://t.co/01UcRbuODp
8 hours 40 min ago

OCLS
@oclslibrary
"You can cut all the flowers but you cannot keep spring from coming." Poet and Nobel Prize Winner Pablo Neruda was… https://t.co/tdahOWnrmN
11 hours 42 min ago