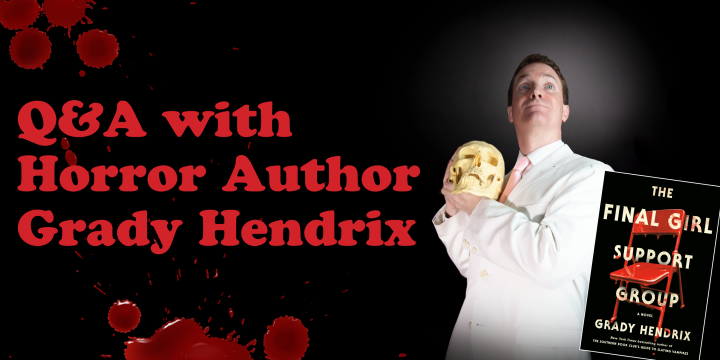 New York Times bestselling author Grady Hendrix has dabbled in nonfiction, screenwriting, film criticism and founding film festivals. His novels include Horrorstör, My Best Friend’s Exorcism, We Sold Our Souls and The Southern Book Club’s Guide to Slaying Vampires. His latest novel The Final Girl Support Group, takes place in a world where final girls (the girls who are still breathing at the end of a horror film) are real and not only famous for surviving massacres but the slasher films they have inspired.

Grady Hendrix: The Final Girl Support Group
Friday, October 22, 9 p.m.
Grady Hendrix, New York Times bestselling author, gives you a guided tour of the history of murder books and movies and discusses what it means that so much of our entertainment is about selling murder for fun. Registration required. Recommended for ages 18 and up.

Have you always been attracted to slasher films?

I was always more of a zombie guy and less of a slasher guy, but you absorb them by osmosis. I actually think there are plenty of people out there who’ve never seen a single slasher but know who Michael, Freddy and Jason are. However, writing this book I went deep on slashers and now I find they contain the answer to everything. I mean, what are our lives but slasher movies where we’re constantly running and running, trying to escape an unstoppable killer who will eventually catch up with us one day and murder us in a really unlikely way that we did not see coming?

All your books feature female protagonists. Why do you feel you are drawn to such strong female characters?

My characters need to be very different from me or else I just wind up turning them into my stand-in: ridiculously handsome and enormously talented, great dancers, good listeners, etc. One thing that helps is to make them another gender so I can see them more as characters and less as reflections of myself. Also, being raised mostly by my mom and having three older sisters helps.

Your books certainly have some of the most entertaining and clever titles of anyone working today. Do you have a box just full of amazing titles waiting for stories to go with them?

That box is in a locked vault in a bank because a good title is half the battle. My Best Friend’s Exorcism and The Final Girl Support Group were both titles before I even had stories to go with them, and everything I needed to write those books is contained right there in those titles. However, the line between a really great title and an absolutely stupid title is very thin and it’s sometimes hard for me to tell which side of it I’m on.

Which authors/books had the biggest impact on you during your formative years?

Getting Stephen King’s It for Christmas when I was 14. Finding some paperback copies of a couple of volumes of Clive Barker’s Books of Blood in a beach house we rented when I was 15. Stumbling across a copy of Reader’s Digest’s Folklore, Myths and Legends of Britain in the library of a house we lived in when my dad worked in London when I was 6.

Do you have any favorite Halloween traditions?

My tradition is to go to the Exhumed Films 24-hour horror movie marathon in Philadelphia. They don’t tell you any of the titles in advance so it’s a hell of a lot of fun. And it’s probably the only way you should watch Flesh Eater – at 4 a.m., locked in a room with 400 sweaty fans.

Any suggestions for seasonal books and movies people shouldn’t miss?

For me, it’s not Halloween if you don’t watch Disney’s animated short version of The Legend of Sleepy Hollow. And if you want that old school buzz, John Coyne’s ridiculously fun Hobgoblin is a 1982 paperback that feeds into the Satanic Panic fear over role-playing games like Dungeons & Dragons before it goes berserk and becomes a 100 mph slasher in the final 70 pages that unfold during a high school Halloween dance.

To find out more about Grady Hendrix, visit gradyhendrix.com.

author interview
grady hendrix
the final girl support group
author
halloween
horror
Comments and postings by library patrons do not necessarily reflect the official position of OCLS or its staff. All comments and posts are public records. Patrons are strongly encouraged to protect their privacy when commenting or posting on social software tools.
About