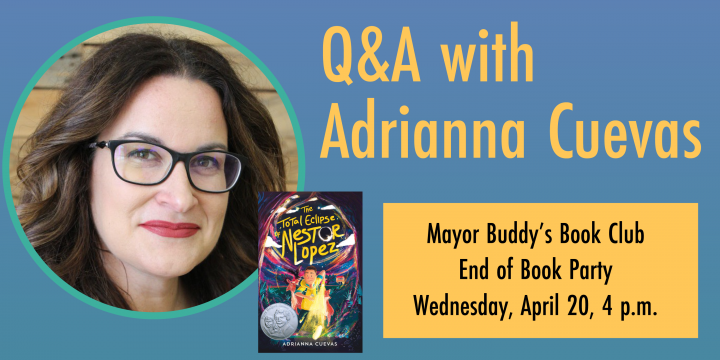 Adrianna Cuevas is a first-generation Cuban American originally from Miami, Florida. She is the award-winning author of several middle-grade novels for young readers including Cuba in My Pocket and The Ghosts of Rancho Espanto. In 2021, she won the Sunshine State Young Reader Award for her grade 3–5 novel, The Total Eclipse of Nestor Lopez.

This month, Mayor Buddy’s Book Club will have a virtual visit with Adrianna to celebrate the End of Book Party on Wednesday, April 20, 4 p.m.

Congratulations on being selected as a Sunshine State author! How did it feel to get that news?

I was so excited! I grew up in Miami and it was a routine in my family to go to the library every weekend and check out a mountain of books. So to be on a reading list from my home state was very special.

There are a variety of animals and interesting animal trivia in The Total Eclipse of Nestor Lopez. What’s your favorite animal?

My favorite animals are llamas because they look extremely silly but don’t seem to mind that at all. Also, they spit when they’re mad and sometimes I feel like doing that.

How do you select the names of your characters?

My first goal when choosing character names is to make sure that the name matches the cultural background of the character. Most of my characters are Cuban American, so I use a lot of names that are common in Cuba. I also like to pick names that might be a little uncommon in order to make my characters unique.

The Total Eclipse of Nestor Lopez beautifully combines supernatural elements, Cuban culture and the reality of military family life. What resources did you use to write it?

For the supernatural elements, I used my imagination combined with the mythology of Costa Rica and Panama, two countries I lived in when I was younger. All the details regarding military life came from my husband, who was an Army military policeman. Finally, the Cuban elements come from my own culture, and I was excited to share Cuban food and Spanish sayings with my readers.

Nestor’s abuela (grandmother) makes Cuban guava pastelitos for him, which sound delicious! Were those your favorite food growing up?

I loved pastelitos growing up! But I never learned how to make them myself until I moved away from Florida. Where I live in Texas, you can’t just pop into Publix and buy some, so I had to learn how to make them at home.

What inspired you to become a writer?

I had an extremely overactive imagination when I was young and spent most of my time daydreaming stories. My fourth-grade teacher inspired me to start writing those stories down and I haven’t stopped since.

Do you prefer writing in silence or to music?

I have a very short attention span and get distracted easily. If I had to write in silence, my brain would work overtime to make up for the lack of stimulation. So I actually used to write while watching television because I needed to be able to glance away from my laptop and get different visual stimulation every few minutes while I was writing. I’ve transitioned now and trained my brain to write while listening to music. Some authors curate special playlists that match the mood of each chapter of their books, but I write my super Cuban stories while listening to K-pop.

Who were your reading/writing influences growing up?

My two favorite authors when I was younger were Jack London and Edgar Allan Poe. I loved Jack London because, as a kid from Florida who’d never seen snow, he showed me how you could transport readers to different worlds and experiences they’d never seen or had. Edgar Allan Poe was a favorite because I’m a huge fan of horror, and I loved the possibility of scaring readers while also talking about big themes.

What do you like to do when you’re not writing?

When I’m not writing, I love trying new baking recipes that may or may not set off the smoke alarm in my kitchen. I also practice fencing, which is a sport I took up about three years ago when I wanted to learn something new. I also love exploring all the museums, hiking trails and restaurants in Austin and discovering places I haven’t been before.

This author virtual visit is sponsored in part by the State of Florida, Department of State, Division of Arts and Culture and the Florida Council on Arts and Culture in conjunction with the City of Orlando.

mayor buddy's book club
adrianna cuevas
cuban american
sunshine state author series
author
children's books
author interview
Comments and postings by library patrons do not necessarily reflect the official position of OCLS or its staff. All comments and posts are public records. Patrons are strongly encouraged to protect their privacy when commenting or posting on social software tools.
About