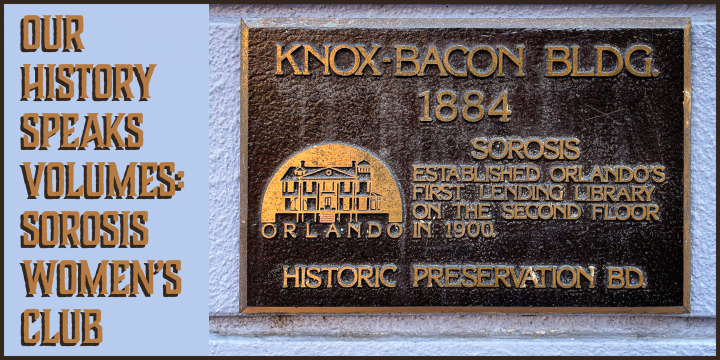 In 1893, 10 Orlando women gathered to organize a study and social group. They named their group the Sorosis Club, after the Latin word for sisterhood, and shortly thereafter began meeting regularly at members’ homes to discuss literature and civic matters.

With Sorosis growing, regular club events moved to the Knox-Bacon Building, an historically preserved landmark located on East Pine Street. Half of the Knox-Bacon building was then owned by Winter Park resident, Mrs. Comstock, who graciously offered the second floor of the building as a meeting space for the group. Following the passing of the original building owner’s wife, the space was presented to Sorosis as a permanent clubhouse.

By the late 1890s, membership in Sorosis had risen to include more than 25 women. No longer content to be just a collective of congenial women, Sorosis set their sights on improving the overall education and quality of life for Orlando residents. To accomplish this, Sorosis set about collecting sizable contributions of books from community members, and opening the very first lending library in Orlando. Sorosis members and non-members alike were invited to visit the second floor of the Knox-Bacon building and check out books for a flat price per item borrowed. Initially, the library was open just eight hours a week: three hours on Thursdays, and five hours on Saturdays, but community demand necessitated increasing the operating hours to two hours a day, seven days a week.

With library service proving too popular to ignore, Sorosis petitioned the local government to found a public library system. Thanks to vocal support from the community, and the sizable donation of materials from Captain Charles Albertson, Sorosis’ campaign proved successful: In 1921, Orlando reached an agreement to erect the Albertson Public Library.

By then, Sorosis had moved on from the Knox-Bacon building and into a new clubhouse on Liberty Street. What remained of the Sorosis lending library was donated to Albertson Public Library and included in the circulating collection when the building opened to residents in 1923.

Following the library’s opening, the women of Sorosis remained extraordinarily devoted to philanthropy and local civic issues, offering scholarships and playing an instrumental role in passing legislation which recognized Loch Haven Park as a cultural center in perpetuity. Sorosis also continued to be a vital partner to the freshly formed library, raising the funds necessary for bookmobile service which brought library resources to the more rural areas of Orange County.

In 1972, Sorosis relocated again to their current clubhouse on East Livingston Street, and to this day remain engaged in community service projects throughout Central Florida.

While Sorosis is not as commonly cited in the history of Orange County Library System as Captain Charles Albertson, they were the pinion in the mechanism which brought public library service to the community, and were therefore no less foundational. To learn more about Sorosis’ contributions to the library, as well as their tireless dedication to the cultural growth and development of Orlando, visit orlandomemory.info.

our history speaks volumes
history
womens history month
library
sorosis womens club
Comments and postings by library patrons do not necessarily reflect the official position of OCLS or its staff. All comments and posts are public records. Patrons are strongly encouraged to protect their privacy when commenting or posting on social software tools.
About

OCLS
@oclslibrary
Learn how to apply several design techniques and use common editing tools to trace and color artwork as well as man… https://t.co/L6RozJURmV
3 hours 13 min ago

OCLS
@oclslibrary
Grab a deck of playing cards, some glue, and pieces of paper from around your home to create a unique gratitude jou… https://t.co/6LtxbhgqTt
6 hours 3 min ago