From August 2 through September 20, Hiawassee Branch of Orange County Library System will get a much needed refresh to better serve the community. Learn more > 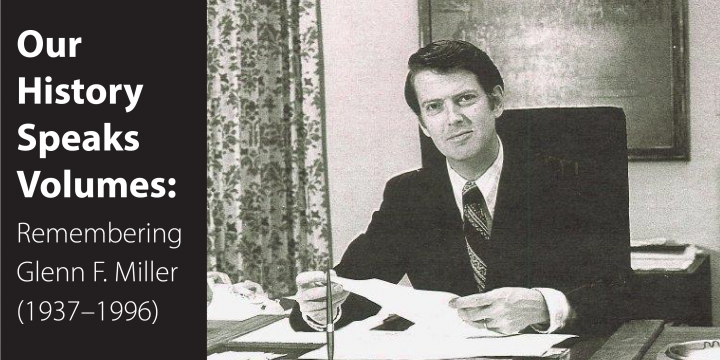 On November 1, 1970, Library Director Clara Wendel retired having served 27 years as head of Orange County Library System. She was succeeded by Glenn Miller, who became only the third library director in OCLS’ nearly 50-year history.

In June 1969, Glenn Miller and his family moved to Winter Park, Florida, where he became the assistant director of Orlando Public Library. Glenn was named director shortly thereafter at the age of 32. His numerous contributions to Orange County Library System include championing the bond issue that gave the library status as an independent taxing district and overseeing the expansion of the Orlando Public Library building.

Glenn Miller’s customer-centric approach to leadership often saw him referencing the fictional Orange County resident Harry Smith. To Miller, Smith was an amalgam of civically engaged residents who believed they should have an innovative level of library service commensurate to the amount they paid in taxes. To that end, Miller created new policies for everything from how customers were treated, to how books were organized in the stacks in order to increase accessibility and make it easier to browse. Miller’s philosophy is perhaps best exemplified by his adoption of our most widely used resource: home delivery.

Miller retired from Orange County Library System in 1995, after 25 years of devoted service. He passed away the following June. This month marks the 25th anniversary of his passing.

our history speaks volumes
history
glenn miller
library director
library staff
orlando memory
Comments and postings by library patrons do not necessarily reflect the official position of OCLS or its staff. All comments and posts are public records. Patrons are strongly encouraged to protect their privacy when commenting or posting on social software tools.
About