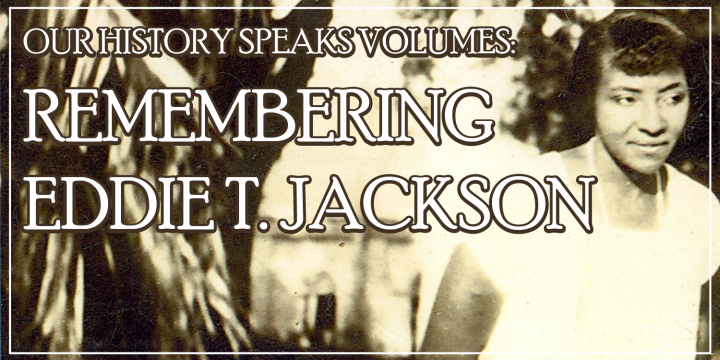 In June 1924, our Booker T. Washington Branch opened at 107 South Terry St. The branch was the second public library location to open in the city of Orlando following the Albertson Public Library, which began service the previous year. Selected to serve as Head Librarian of the Booker T. Washington Branch was Eddie T. Jackson. Upon assuming her role, she became the first African American librarian in Orlando, and for 22 years she provided exemplary library service to the residents of West Orlando.

Born Eddie Natalie Byrd Thomas in 1902, she came to Orlando following the death of her mother in 1914. She graduated from Johnson Academy (now Jones High School) in 1918 and later became the first African American woman from Orlando to earn a Bachelor of Arts Degree from Morris Brown College in Atlanta, Georgia. She had the distinction of serving as an Orange County public school teacher for 34 years, as well as being a member of the NAACP and The National Council of Negro Women.

Eddie lived during a time when much of Orlando, including the public libraries, were segregated. In her position both as Head Librarian and educator, she sought to inspire young African Americans to not allow other people’s perspectives on the color of their skin to dictate their outlook on life. She fostered children’s growth and passion for literature motivating them to become self-sustaining adults. In a letter Eddie penned in 1927 to what is now called Orlando Sentinel, she implores parents to bring their children to the library so that her staff could help select books for them.

“It is the duty, as well as the pleasure for us to assist in making a choice,” she writes. “Because we realize that a taste for that which is good must be fostered in youth, or it will seldom be possessed in old age.” One of the many children she encouraged was former Florida State Representative Alzo J. Reddick, who considers Eddie his literary mentor and credits her for introducing him to an entirely new world of books and reading.

Eddie married John Henry Jackson on August 29, 1930; it was the second marriage for both of them. She then gave birth to her only daughter, Yvonne Kathryn Jackson in 1935. Rather than welcome Yvonne to the world in the segregated basement of the local hospital, Jackson opted to give birth in her home at 730 West Jackson Street. As Yvonne grew, she would often help Eddie open and close the Booker T. Washington Library, taking the short, quarter-mile walk together from their home.

Eddie Jackson passed away on October 26, 1979. Among her possessions, a note was found which read: “My Life – What beautiful surroundings were chosen for me to enjoy, while on earth ... I’ve done my work – I’ve sung my song, may I rest in peace.”

In 2000, a program honoring Eddie Jackson’s life and legacy was held by Orange County Library System, and presented by her daughter. As commemoration for her years of service, a portrait of Eddie Jackson was commissioned and can now be viewed on the fourth floor of Orlando Public Library.

Our History Speaks Volumes will be a recurring feature to give readers insight into Orange County Library System’s nearly century-long history.

our history speaks volumes
history
library staff
black history month
booker t. washington branch
Comments and postings by library patrons do not necessarily reflect the official position of OCLS or its staff. All comments and posts are public records. Patrons are strongly encouraged to protect their privacy when commenting or posting on social software tools.
About