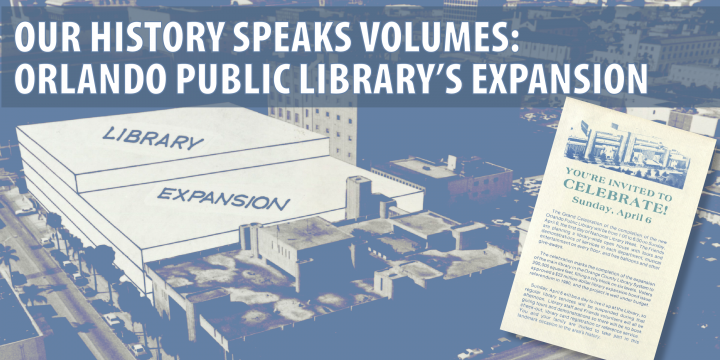 April 6, 2020 marks the 35th anniversary of Orlando Public Library’s 230,000 square foot expansion. In 1966, when the building was first constructed, it occupied a comparatively meager 60,000 square feet. However, it was always the intention to further expand upon the library, and that consideration went into the original structure’s design by architect John M. Johansen.

To complete Johansen’s vision, the library selected the talents of Duane Stark, whose other contributions to Central Florida include Orlando Museum of Art and Epcot’s Mexico pavilion. Painstaking efforts were made by Stark and his team to seamlessly blend the original building’s unique design with the new expansion, including the use of 19,000 cubic yards of concrete.

Yet, there are still some slight differences between the two sections of the structure. For example, did you know that arched doorways and awnings only appear in the original section?

Upon completion of construction, Orlando Public Library became one of the largest public libraries in Florida, spreading across a full city block and featuring five above-ground floors, a basement and an underground parking garage. Today, it remains an architectural landmark, being a key example of the architectural style popularized in the 1950s known as Brutalism, and is one of the last buildings remaining in this style that is open for public use.

orlando public library
brutalism
architecture
our history speaks volumes
Comments and postings by library patrons do not necessarily reflect the official position of OCLS or its staff. All comments and posts are public records. Patrons are strongly encouraged to protect their privacy when commenting or posting on social software tools.
About