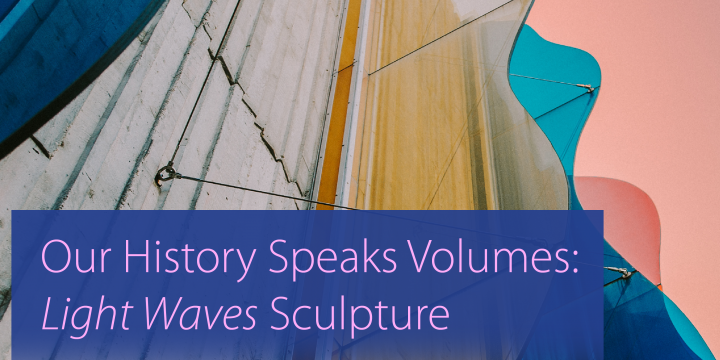 Created by artist Christopher Janney, Light Waves is a unique glass sculpture comprised of four colored bands that bathe the western facade of Orlando Public Library in different spectrums of color depending on the position of the sun. The sculpture also includes a series of touch plates which, when pressed in a specific order, will cause the waves to illuminate and a melody to play. Fans of the sculpture might notice the sound hasn’t been working properly of late. Have no fear, our Facilities team is working with Christopher to make the repair.

We look forward to having Light Waves operational, and for our customers to once again try to decipher the secret pattern.

The sculpture was commissioned by Orange County Library System and unveiled to the public on November 28, 2001. Recognized as an engaging and dynamic contribution to the Orlando landscape, Light Waves received the Downtown Orlando Partnership’s Golden Brick Award in 2002.

our history speaks volumes
light waves
orlando public library
art
interactive
history
Comments and postings by library patrons do not necessarily reflect the official position of OCLS or its staff. All comments and posts are public records. Patrons are strongly encouraged to protect their privacy when commenting or posting on social software tools.
About

OCLS
@oclslibrary
It's National Space Day! Did you know there is no sound in space because molecules are too far apart to transmit so… https://t.co/WsDHwHZT5D
2 hours 37 min ago