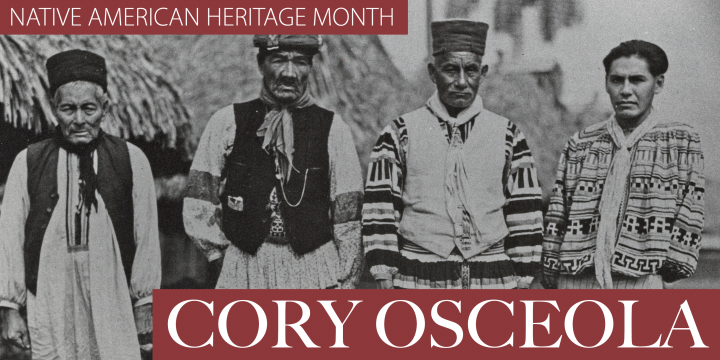 This photo of Cory Osceola comes from a postcard sold at the Musa Isle Indian Village in Miami around 1929. Musa Isle was the first Seminole tourist camp, founded in 1907. At this time, the Seminole people were struggling to make ends meet in a natural environment that was constantly changing due to industrial expansion. These camps became a way for many Seminoles to earn revenue from tourists eager to see how they lived.

Born in 1893, Cory Osceola was a great-grandson of the Seminole War hero Osceola, who died in 1838. In 1922, Cory’s left arm was amputated at the shoulder after a train accident in Fort Lauderdale. He later became the head of the Musa Isle camp before starting his own tourist camp and souvenir shop, called Osceola’s Indian Village, along the Tamiami Trail. He was considered the first American Indian to purchase land in Collier County. As if his life wasn’t already legendary, he and his family also appeared in several films, including Winds Across the Everglades in 1958.

Although the term “chief” isn’t often used in Seminole culture, Cory Osceola was an important leader and used the title when identifying himself in the white world. He frequently met and corresponded with presidents and governors concerning land negotiations and other legal battles, and newspaper reports from the time chronicle his long history of activism on behalf of the tribe. In 1931, he halted President Herbert Hoover’s attempt to appoint a Seminole from Oklahoma as chief of the Florida Seminoles for a day in an effort to sign away tribal land. 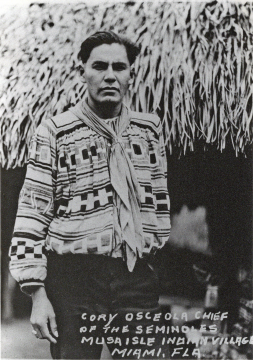 Cory Osceola spent his life bridging the gap between the Seminole people and their white neighbors. Though his activism took place outside Central Florida, his life gives us a fuller understanding of the continuing Seminole story and helps us put our own area’s past into a broader context. Following his death in 1978, his son began an annual event in his father’s honor, American Indian Days, in Naples to increase awareness about American Indians. This powerful photo from [the History Center’s] collection is one of the many marks left behind by this important figure in Florida history.

Originally printed in the Fall 2019 edition of Reflections, the magazine of the Historical Society of Central Florida. Reprinted here with permission.

native american heritage month
seminole
cory osceola
history
orange county regional history center
historical society of central florida
Comments and postings by library patrons do not necessarily reflect the official position of OCLS or its staff. All comments and posts are public records. Patrons are strongly encouraged to protect their privacy when commenting or posting on social software tools.
About