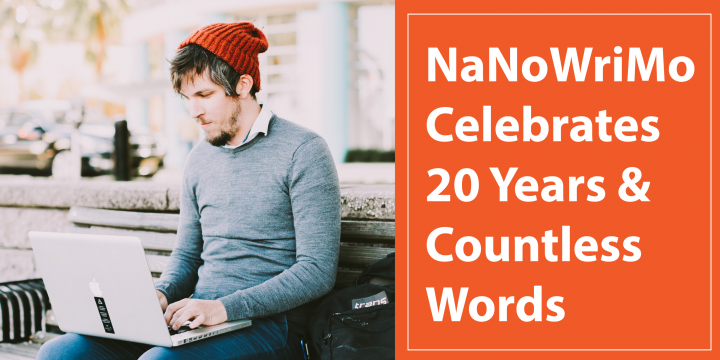 National Novel Writing Month, or NaNoWriMo for short, is an international event for which over 300,000 writers attempt to write 50,000 words of a new novel in the month of November. The goal is to turn off the internal editor, which often slows writers down to a crawl, and get words on the page. As author Jodi Picoult famously said, “You can always edit a bad page. You can’t edit a blank page.”

Both hobbyists and serious writers take part in NaNoWriMo every year. Most of these projects are created for fun, but many of them go on to become published novels. Water for Elephants by Sara Gruen, Fangirl by Rainbow Rowell and Wool by Hugh Howey all began as NaNoWriMo projects. Orange County Library System (OCLS) staff members and authors Lauren Gibaldi and Sarah Nicolas have written novels as part of this event.

Though it began in 1999 with a small group, NaNoWriMo has grown to reach hundreds of thousands of people all over the world. The organization also runs other projects such as the student-focused Young Writers Program and the twice-a-year Camp NaNoWriMo, which allows writers to set their own custom goals.

During November, the website nanowrimo.org offers wordcount trackers and statistics, pep talks from famous writers, and forums to commiserate with and seek help from fellow writers. You can add “buddies,” who can see your progress and encourage you along the way. The website is active other times of the year, too, with the forums open year-round and a structured NaNo Prep 101 course offered in September and October.

At current count, 646 local regions host NaNoWriMo events from Seoul to Milwaukee to Cape Town to our very own Orlando. OCLS works with Orlando NaNoWriMo, sometimes called NaNOrlando, to host prep workshops and write-ins throughout the month of November. At write-ins, local writers meet to do writing sprints, encourage one another, and sometimes play writing games to boost creativity. The library write-ins are open to everyone, even if you aren’t officially participating in NaNoWriMo, so we hope to see you there.

For a complete listing of writing events at the library, including NaNoWriMo Write-Ins, visit ocls.info/writerscorner.

NaNoWriMo
library staff
writing
writers corner
Comments and postings by library patrons do not necessarily reflect the official position of OCLS or its staff. All comments and posts are public records. Patrons are strongly encouraged to protect their privacy when commenting or posting on social software tools.
About

OCLS
@oclslibrary
Preschoolers will solve cases with songs, stories, and an introduction to Hindi! Join us for Mira Royal Detective B… https://t.co/sFyCA4l0CG
2 hours 32 min ago

OCLS
@oclslibrary
Whether you are looking to make new friends, connect with other readers or want to establish a regular reading habi… https://t.co/OHAnHISpfy
8 hours 22 min ago