Music in the Time of Quarantine 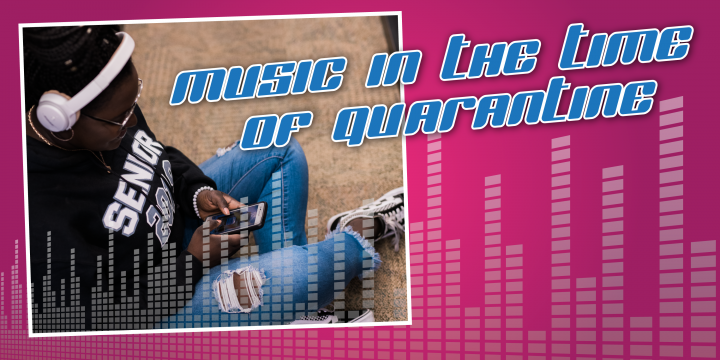 In troubling times, music is something that unites us and lifts our spirits.  According to Psychology Today, music is beneficial to mental health because it elevates our mood, promotes creative thinking, and makes us feel good.  We can also have fun with it by making playlists that contain songs that reflect our current situation or feelings.  Hence the popularity of “quaran-tunes,” or songs whose titles or lyrics make us chuckle as we socially distance and stay home during the COVID-19 outbreak. Using Freegal, a music downloading service provided by the library, and Hoopla, a digital media service that allows library users to borrow music (as well as movies, tv shows, audiobooks, comic books and ebooks) and allows you to create your own playlist.

Here are some songs to (hopefully) get you through, all courtesy of resources available with your library card!

“Don’t Stand So Close to Me"
by The Police, from the album The Very Best of Sting and The Police

“Dancing with Myself”
by Billy Idol, from the album Vital Idol: Revitalized

“Alone”
by Heart, from the album Classic Power Ballads

“The Loner”
by Neil Young, from the album Decade

“So Far Away”
by Carole King, from the album Beautiful: The Carole King Musical

“I’m Still Standing”
by Elton John, from the album Rocketman: Music From the Motion Picture

“Stressed Out”
by Twenty One Pilots, from the album 2017 Grammy Nominees

“I Want to Break Free”
by Queen, from the album The Platinum Collection

“Time is Running Out”
by Muse, from the album Absolution

“Show Me the Meaning of Being Lonely”
by The Backstreet Boys, from the album & Juliet: Original London Cast Recording

“Walls”
by Louis Tomlinson, from the album Walls

“Stronger (What Doesn’t Kill You)”
by Kelly Clarkson, from the album Stronger

What songs are listening to right now? Which ones would you add to this list? We’d love to hear from you!

music
digital
streaming
hoopla
freegal
Comments and postings by library patrons do not necessarily reflect the official position of OCLS or its staff. All comments and posts are public records. Patrons are strongly encouraged to protect their privacy when commenting or posting on social software tools.
About

OCLS
@oclslibrary
School is back in session and not just for the kids! Check out this list of "14 Books for a More Inclusive Look at… https://t.co/IwcfRLJIhs
4 hours 43 min ago

OCLS
@oclslibrary
In this month's Food 101, we'll be learning about herbs and fungi and how they're consumed around the world! Regist… https://t.co/DhCwn85P1v
6 hours 34 min ago

OCLS
@oclslibrary
Searching for a new job, updating your resume, or looking to practice your interviewing skills? We're here to help… https://t.co/ntLg1Bykc6
8 hours 38 min ago