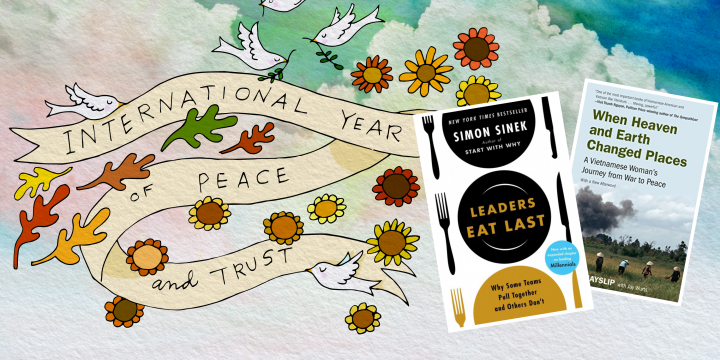 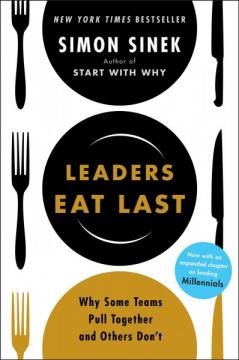 Leaders Eat Last: Why Some Teams Pull Together and Others Don’t
by Simon Sinek

Author and inspirational speaker Simon Sinek writes about how some effective leaders build a “Circle of Safety.” He uses true workplace stories that range from military to big business, from government to investment to illustrate his point.
In working with organizations around the world, Sinek noticed that some teams trust each other so deeply that they would literally put their lives on the line for each other. Other teams, no matter what incentives are offered, are doomed to infighting, fragmentation and failure. Why?

The answer became clear during a conversation with a Marine Corps general. “Officers eat last,” he said. Sinek watched as the most junior Marines ate first while the most senior Marines took their place at the back of the line. What’s symbolic in the chow hall is deadly serious on the battlefield: Great leaders sacrifice their own comfort – even their own survival – for the good of those in their care.

“The rank of office is not what makes someone a leader. Leadership is the choice to serve others with or without any formal rank.”
– Simon Sinek, Leaders Eat Last 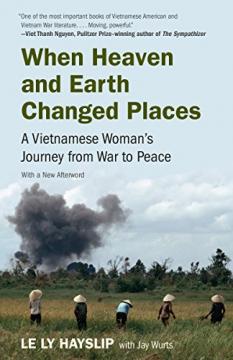 When Heaven and Earth Changed Places: A Vietnamese Woman’s Journey from War to Peace
by Le Ly Hayslip & Jay Wurts

It is said that in war, heaven and earth change places not once, but many times. This haunting memoir tells of a girl on the verge of womanhood in a world turned upside down.

The youngest of six children in a close-knit Buddhist family, Le Ly Hayslip was 12-years-old when U.S. helicopters landed in Ky La, her tiny village in central Vietnam. As the government and Viet Cong troops fought in and around Ky La, both sides recruited children as spies and saboteurs. Le Ly was one of those children. Before the age of 16, Le Ly had suffered near-starvation, imprisonment, torture, rape, and the deaths of beloved family members – but miraculously held fast to her faith in humanity.

And almost twenty years after her escape to America, she was drawn inexorably back to the devastated country and family she left behind. Scenes of this joyous reunion are interwoven with the brutal war years, offering a poignant picture of Vietnam, then and now, and of a courageous woman who experienced the true horror of the Vietnam War – and survived to tell her unforgettable story.

Oliver Stone based his 1993 film Heaven & Earth on When Heaven and Earth Changed Places.

OCLS
@oclslibrary
May has been observed as Mental Health Awareness Month in the United States since 1949. https://t.co/fBUOEP4FOL
10 hours 26 min ago

OCLS
@oclslibrary
On May 22, @orlandoscience Center will open their newest exhibition, Rescue. For this month’s DIY Film Festival, jo… https://t.co/hYt1ho4GWd
12 hours 59 min ago

OCLS
@oclslibrary
Tweens can celebrate National Limerick Day and learn about the history of limerick poems. Then follow along as they… https://t.co/EulNbqL5gz
14 hours 47 min ago