Orange County Library System will be closed on Thursday, November 25 and Friday, November 26 for the Thanksgiving holiday. The library will resume current business hours on Saturday, November 27. Learn more >

Due to supply chain issues that impact inspections, the reopening of the South Creek Branch has been postponed. It is estimated that supplies will not arrive for several weeks. A reopening date will be announced when we have more information. We are sorry for any inconvenience this has caused. While we are waiting to reopen, please visit our other library locations. The branch’s book drop will continue to remain open. Thank you for your patience and understanding. Learn more >

The Great American Read: The Outsiders 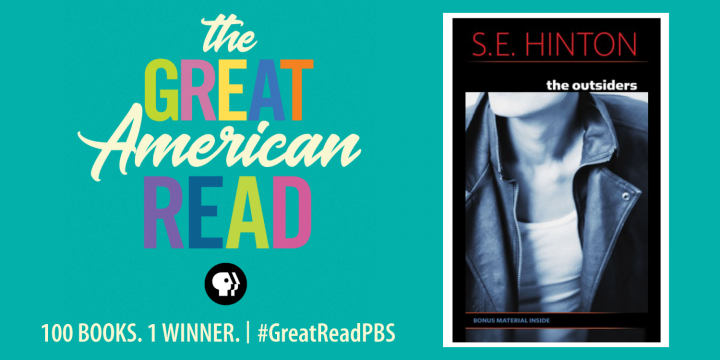 It was in the title. I knew this book was for me before I even read the first word.

People on the outs. People not included. People who didn’t belong.

I’d moved to the South two years earlier and had become familiar with things I’d never known before. The Confederate flag. Hateful looks I didn’t understand. A certain disdain for the tone of my skin and the sound of my parents’ English.

I was in seventh grade, the most miserable and confusing year of middle school. I had a crush on a guy with cool hair, whose skin was the same color as mine, but who had an older brother with white skin who walked the halls giving the Nazi salute. It was the year I didn’t want to be like everyone else, but very much wanted to be like everyone else. It was the year I felt most alone, floating friendless in the universe so far away from the world of those who were in.

That’s when I met Ponyboy and Sodapop. Darry and Johnny – the greasers in The Outsiders. Besides the appeal of coolness and teen rebellion they exuded, I was hooked because of how I related to them. They had little control over their lives and circumstances. They could not change how others looked down on them. But even so, they were the ones who saw through the hypocrisy and inequities of society. They were the ones who had a raw and true understanding of the unfairness of life and injustices in the world. Because they lived it.

For the outsiders, it was their class and their neighborhood. For me, it was my skin and my culture, my last name. But still, I saw myself and my unanswered questions in these characters. How could someone hate senselessly? Why were people offended by your existence? Or for things you had no control over and were a part of you? It was in these characters, angry and reckless, scared and powerless, and possessing qualities others couldn't or didn’t want to see, that I saw myself.

And it meant something that this book was meant for me. The focus was on the lives of teenagers, not adults. Because when you’re young, your life is usually too crowded with adults telling you what to do and when to do it and how to think, just as you are simultaneously realizing how wrong and flawed adults can be.

So, yes, a book about rebellious teens in their own world was what I needed. It was the book I needed at the time I needed it.

What has stayed with me even all these years later is how I felt when I read it. Ponyboy’s plight touched my heart. And the way those who didn’t belong were humanized, the way their story was made to matter, and their suffering made real, meant so much to me.

It’s because of this book that I can recall my exact seat in my seventh grade English classroom. And how if Ponyboy could make sense of his world and experiences by writing about it, maybe I could, too. And if S.E. Hinton wrote this book when she was a teenager, as my teacher told us she had, then maybe I could, too. And maybe, even though the world is surrounded by bad, we could all take Johnny’s advice to Ponyboy and "stay gold."

And even if change is inevitable, if nothing gold can stay, then maybe nothing bad (like life in seventh grade) can last forever either. Which is good for any outsider to know.