The Great American Read: The Martian 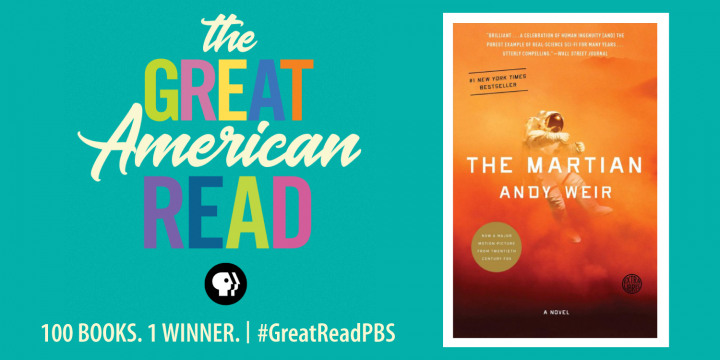 What is it about the planet Mars that makes it so fascinating? As a kid, I knew about Mars before I knew all the names of the other planets. I was a fan of H.G. Wells and his invaders from Mars and Ray Walston was My Favorite Martian on TV reruns. As an adult, I was drawn to the enduring odyssey of the intrepid rovers, Spirit and Opportunity.

The allure of Mars is undeniable. The mystery. The possibilities. The adventure that awaits. I've sought out stories of Mars as long as I've been a reader. From Edgar Rice Burroughs to Ray Bradbury, I've been enthralled by tales of the Red Planet. This long-time preoccupation with Mars is what first led me to Andy Weir's riveting The Martian.

This book is a fascinating hybrid. It's part survival tale, part sci-fi adventure and part travelogue. The best books transport you somewhere new, but this one takes you all the way to the unforgiving terrain of another planet. I have rarely read a modern novel that gave me such a sense of place. Usually, science fiction allows the author great license to create an entire new world, but thanks to the rover missions, we know more about Mars than any other time in history. Weir uses this knowledge to craft the setting of his novel and it’s a vivid landscape.

Set in the very near future, The Martian is about astronaut Mark Watney and his struggle to survive after being left for dead. A freak accident leaves him stranded when his team is forced to abandon their mission during a savage dust storm. With both his fellow crew members and NASA mission control thinking him dead, Watney must rely on the scant resources of the abandoned Martian base to sustain himself.

Weir did his research and this book benefits from his dedication. While taking his share of dramatic license, the author is still able to weave an engrossing story that feels based in reality. A lot of science fiction will wow you with pseudo science to support their story. Characters usually throw around phrases like "the gravity stabilizers are in flux with the oxygen regenerators, which have integrated with the food synthesizers so everything's cool." Such is not the case with The Martian. There's no magic machine that makes life easier for our hero. You are constantly reminded that he is in a deadly and unforgiving environment.

The book feels like it unfolds in real time. The book alternates from Watney's first-person log entries to a third person narrative. It does have a very slow pace with several chapters dedicated to Watney repairing transmitters, charging solar batteries, and doing daily maintenance on the Martian base, but even the mundane stuff is engaging. Rather than being tedious, these passages illuminate life on Mars. I usually tune out when a book starts churning up the technobabble, but Weir uses the terminology to add color and credibility to the setting.

Watney is a likable hero, self-deprecating and utterly human. The character's warmth helps counterbalance the science and technology interwoven throughout the story. The Martian is a love letter to astronauts, especially their ingenuity. Watney is a consummate problem-solver and you enjoy how he "MacGuyvers" his way across the planet. The book celebrates critical thinking.

The Martian is a great read because whether or not you like stories about spacemen or other planets, you will relate to this guy's single determination to just not be dead. As a kid, one of my favorite stories was Robinson Crusoe. I always found the concept of someone forced to survive on their wits alone wildly compelling. I feel the same way about this one. While I enjoy the futuristic setting and the realistic details of Martian geography, the real joy of this book is witnessing Watney triumph to live another day.