The Great American Read: The Giver 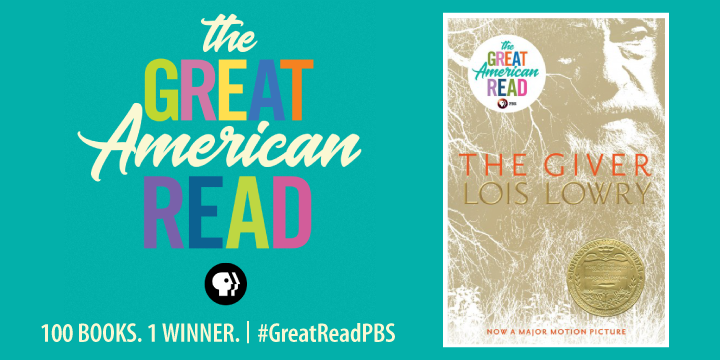 When I was in fourth grade, my school librarian recommended the author Lois Lowry to me. I quickly fell in love with her books, devouring everything from Number the Stars to A Summer to Die (I was a bit of a dark reader, even at a young age). The following year, the same librarian excitedly handed me a new book by Lowry: The Giver. Before then, the books I read were realistic. Realistic things happening to people in either a current or past time. I understood fairy tales of course, but I didn’t exactly read them. I knew about aliens and the future, but the concept of “dystopia” wasn’t in my vocabulary. And perhaps because of that, or maybe because it’s just truly a wonderful book, The Giver surprised and enamored me to the point that it became a lifelong favorite book. I read it again and again and again. There was something haunting and real and beautiful and scary about Jonas’s story that sticks with me through today.

The Giver is about a seemingly utopian (but ultimately dystopian) village where everything is predetermined. At age 12, you’re assigned your profession, and that’s where we meet Jonas. He’s given the rare assignment of Receiver of Memory – he’s to learn from the current Receiver (who becomes The Giver) about the past, and life outside their community (“Elsewhere”). Ideas, thoughts and reality thought “too dangerous” for everyday people, such as extremes like war and simple things like weather. It’s slowly revealed how little Jonas and his friends know, and how close-minded and superficial the civilization is.

Lowry has the ability to make you forget about everything when you read her books. You become engrossed with Jonas’s story, and learn along the way him, being surprised by each reveal. It’s a book that makes you question what you know, and wonder about what you don’t. But mostly, the book is simply beautiful. It taps into the feelings of curiosity and adventure and wonder that every child has, and adults seem to forget about. I’ve re-read it several times since, and I still love it. It shows how to be brave and strong, even when the world may want to hold you back.

Interestingly, despite being published in 1993, the book is timeless – the future timeline is never defined, and seems as horrifying now as it did back then. And it’s a children’s book – which was unique for when it was written. Sure, the story had been told before (and continues to be told today), but never for a younger audience. Lowry assumed children would understand, and they did.

In her Newbery Award acceptance speak for The Giver, Lowry said, “The man that I named The Giver passed along to the boy knowledge, history, memories, color, pain, laughter, love and truth. Every time you place a book in the hands of a child, you do the same thing. It is very risky. But each time a child opens a book, he pushes open the gate that separates him from Elsewhere. It gives him choices. It gives him freedom. Those are magnificent, wonderfully unsafe things.”

I appreciate my former school librarian for placing this book in my hands. And as a current librarian, I’m thrilled every time I can pass the book along, be it to child or adult. It’s my choice for The Great American Read because Jonas embodies everyone, and all the wonderfully unsafe things we look for in life.

great american read
book recommendations
books
library staff
Comments and postings by library patrons do not necessarily reflect the official position of OCLS or its staff. All comments and posts are public records. Patrons are strongly encouraged to protect their privacy when commenting or posting on social software tools.
About

OCLS
@oclslibrary
Check out this list of 10 great feminist children's books to inspire the little person in your life. https://t.co/Ko38IAGEBC
8 hours 30 min ago

OCLS
@oclslibrary
Parents of toddlers, register your little one for next week's Space Discovery. Zip up your suits and pop on your he… https://t.co/RJBDsRzQpz
10 hours 23 min ago