The Great American Read: The Chronicles of Narnia 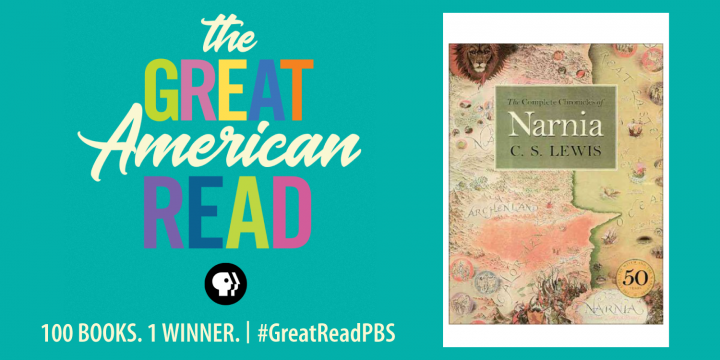 As I was raised in an a-religious Canadian household, the overtly Christian themes of The Chronicles of Narnia were completely lost on me. All I knew was it had closets with magic portals, talking animals, ice witches eating Turkish delight—whatever the hell that was, and epic adventures where kids were at the helm and adults were womp-womping in the background like the teacher from the Peanuts comics. In fact, I read them so religiously (har har) that I regularly had to tape them back together again because the spines fell apart. Because I’m an extreme reader, like, I get really into it and punch those books in the face.

Side Note: I’m not going to bring up the movies, but I’m thankful to them for introducing me to Ben Barnes and James “I’m rocking this goat bottom and red scarf combo” McAvoy.

C.S. Lewis mishmashed Greek and Roman mythology with British fairy tales and Bible-bologna together to create a classic allegorical children’s series that’s sold 100 million copies, a combo that despite the aforementioned dead horse-beating Christian messaging, is ultimately a completely bangarang look at a generational fight of good versus evil.

While Lewis seems to enjoy a deified popularity in America akin to Thomas Kinkade – he’s featured on a church’s stained-glass window somewhere in California – in the United Kingdom he’s kind of an embarrassing joke. Like a crazy uncle who happened to do something really popular in his prime but ultimately just drinks to much at Christmas and spends the evening farting in the corner. But since the Brits exist in a perpetual state of embarrassment and under-the-breath-apology-muttering, who cares. His lite-American sainthood is rooted in his successful juxtaposition of dogmatized faith with a film of childhood wonderment and fantasy. The literary equivalent of a Christian twinkie; found in every gas station and tucked lovingly into your kid’s lunch before shoving them off to school.

The books all have something different and episodic to lean into, which is why I liked revisiting them so much as a wee me. While The Lion, the Witch, and the Wardrobe (heretofore referred to as “El Dub Dubs”), Prince Caspian, The Voyage of the Dawn Treader and The Silver Chair all have recurring characters that follow a familiar arc (because only kids can come to Narnia and you’re kicked out if you put on lipstick and nylons – poor Susan), standalones like The Horse and His Boy and The Magician’s Nephew could be devoured in one sitting at summer camp and you wouldn’t have to know anything about the Pevensies and their exhausting White Burden to save the world while wearing a crown.

Philip Pullman, the author of His Dark Materials, another amazing series I spooned when I was a kid, absolutely hated Narnia and called it “ugly” and “poisonous.” But he hated Jesus, so that’s his own carry-on baggage. Tolkien wasn’t a fan either, but that’s because his stuff wasn’t as family-friendly and didn’t sell as well.

Now while I freaking love this series, I’m still confused about what Aslan said to Edmund up in the mountains that made him into a Stepford Cuckoo version of himself, post-lion resurrection party. Like, that kid was the worst, so what did that Jesus lion do to him?

And why wasn’t Susan on the train that killed all of the Super Friends of Narnia in The Last Battle, the Thor: Ragnarok of the series?

As an out gay man, you’d be hard-pressed to see me willingly hop back into a closet, but I’m going to have to pick up those books again and I’ll probably need some more tape to hold them together.

OCLS
@oclslibrary
Did you know you can repurpose old books into beautiful book page wreaths? Here are step by step instructions to ge… https://t.co/XSTWnQgTjz
9 hours 36 min ago

OCLS
@oclslibrary
Free Web Design classes are available to you with your library card! Learn about the language of the internet, HTM… https://t.co/8TER4IeO4P
11 hours 29 min ago

OCLS
@oclslibrary
Do your little ones love animals? These virtual options allow you to enjoy watching animals in their natural habita… https://t.co/GmVKb3jjo1
15 hours 37 min ago