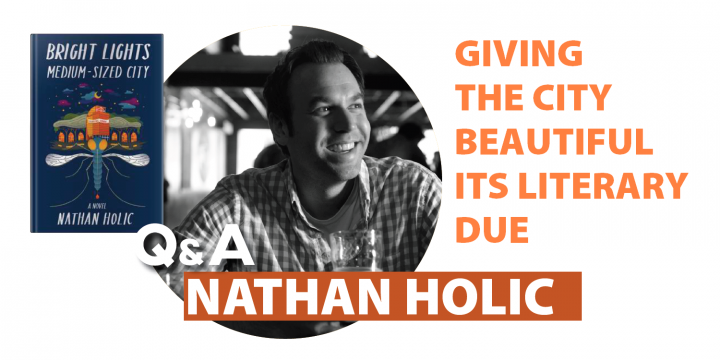 This month, independent publisher Burrow Press will release what they are calling “the Great Orlando Novel” from local author Nathan Holic, Bright Lights, Medium-Sized City. “I think it’s important that Orlandoans can see their city in a book or movie or TV show,” Nathan told us. “That our stories — stories about real humans, with real fears, and real failings, and real successes — are told.” The quirky, Orlando-centric cover art is by Sean Walsh, who created the look for our Local Wanderer program. As part of the book release, Nathan will bring “Comics for Non-Artists” to Orlando Public Library. In the workshop, Nathan will show people how they can create sequential stories, even if they are not artists.

Scottie Campbell: Was there are particular inspiration for Bright Lights, Medium-Sized City?

Nathan Holic: Bright Lights, Medium-Sized City mostly grew out of a desire to write a city novel for metro Orlando, something that would capture the way it feels to live in this place. I remember reading Tom Wolfe’s Bonfire of the Vanities 15 years ago, and being blown away. It was such an ambitious venture, to — as Wolfe said — try to “cram as much of a city between two covers” as possible. I’d never been to New York, but I felt transported to the city in the mid-‘80s. The same thing happened when I read his Atlanta novel, A Man in Full. And then Jonathan Franzen’s The Twenty-Seventh City, which is about St. Louis. And Jeffrey Eugenides’ Middlesex, which takes place in Detroit.

SC: The more of these city novels I read, the more I just thought: why hasn’t someone written about the city of Orlando in this way?

NH: I think we’ve got a fascinating city. There’s no place like it in the world. We’re a theme park mecca, but we’re also a former citrus and cattle empire. There’s conflict between the way things were, and the way things are. And there’s conflict between the vacation world, and the residential side of town, and between the natural world (wetlands, swamps, etc.) and the pristine gated communities and golf courses built upon that Florida land. I also find it interesting that we’re in the dead center of the state, and we weren’t built upon rivers or lakes or any other natural transportation channel … we’re a highway and airport city, one of only a handful of uniquely 20th-century cities that exist on almost random spits on land.

And maybe most interesting, we are a case study in overnight growth, in how a city develops its own culture. Most of the people who live here are from somewhere else, and—in the last twenty years—they’ve all had to figure out how to be Orlandoans, and what the city’s identity is, and should become.

Every American city has personality, but as a writer, I just think there are so many cool things in Orlando to explore.

SC: The structure of the book sounds unique with visuals interspersed with chapters. What will the experience be like for the reader?

NH: I’ll try not to define exactly what the reader should experience … I’ll simply say that it is my hope that readers have an experience.

I think that we are living in the age of CONTENT OVERLOAD. There are so many web sites out there. So many blogs. So many journals. So many magazines, print and online. So many social media accounts. All of them pumping out articles, and stories, and listicles, and long-reads, and short reads, anything to keep us fixed on our phones and computer screens so that we just keep scrolling and clicking.

And then there are the streaming services! New Netflix movies and TV shows every day. New Amazon Prime shows. And Disney Plus. And ten thousand cable channels. Content content content.

And while I think there are a lot of great creators out there, and a lot of great books and movies and TV shows, I think that this era of CONTENT OVERLOAD has also given rise to a mountain of material that just sort of exists. You read it. You watch it. And by the next morning, you’ve forgotten that you even consumed this content. It’s just … stuff.

One of my greatest hopes for this book is that — through the story itself, and through the structural conceits, and through the illustrations — the reader actually has an experience, engages with a book in a deep and immersive way. This isn’t just content for the sake of content. This is something that the reader feels, and finds difficult to forget.

SC: Is 'choose your own adventure story' an accurate description of its style?

NH: The first chapter of the book is a “choose your own adventure” story. In terms of an experience, it’s meant to be interactive. This isn’t a chapter that you can just passively read. You have to flip around. You have to make choices. And you have to (in many cases) get disappointed by the choices you’ve made!

The third chapter is structured as a rulebook, and by the end of the book, we’re stuck inside a final exam. As a reader, you’ll be kept surprised throughout!

SC: We think the title is a play on Jay McInerney's '80s book Bright Lights, Big City; are we right?

NH: Definitely. While the overall inspiration for the book was the Tom Wolfe style “city novel,” the voice is indebted to McInerney.

I wanted to write a book about young men making bad decisions in emulation of the older, more successful men around them. In this sense, I think that the ‘80s (McInerney’s time frame) are a fine parallel to the boom/bust of the 2000s. A lot of people made a lot of money, and thought they were geniuses. Excessive greed and arrogance. But then a lot of people lost a lot of money, many of them overnight, and learned very quickly that they weren’t really that smart.

In my book, the character is humbled, and forced to reckon with who he has been for the better part of a decade, and how to restructure his life if he truly wants to be a good person. This is something that McInerney started to explore, also, with some of his other New York books (Brightness Falls and Bright Precious Days, for instance).

If you’ve read Bright Lights, Big City, though, I think you’ll see a number of other parallels, and I think you’ll find the voice to be a fun echo to that book, though it doesn’t attempt to simply replicate the character or plot.

SC: If Bright Lights, Medium-sized City were made into a movie, what actor would you want to be Marc Turner?

NH: I think we should use digital de-aging technologies to make Michael J. Fox mid-20s again, but this time cut his hair shorter, and spike it with bad 2000s-era hair gel/paste/wax/glue.

If he’s not interested, then Justin Timberlake. That would make it the most Orlando movie ever.

SC: Why is it important to write stories set in Orlando?

NH: Orlando is a city that most of the world — not just America, but the world — doesn’t actually see as a real place. It’s an airport. And it’s highways. But it’s not real, and the people who live here … they’re not real, either. We’re all just props and background extras in someone else’s vacation.

I also think it’s important that we make this into a complex place. The world sees it as a simple place: theme parks, highways, an airport and chain restaurants. But if you’ve lived here for any stretch of time, you know that we have our own frustrations, our own unique problems, our own traditions and histories, our own myths and legends. The more that we write about Orlando, the more complex it becomes. 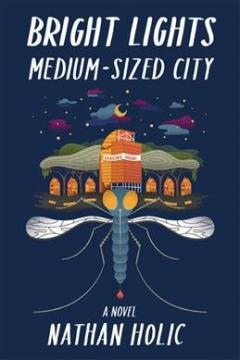 SC: Sean Walsh created the look for our Local Wanderer program, so we're big fans here. How did he come to be the cover artist for your book?

NH: That’s all Ryan Rivas, publisher of Burrow Press. He’s perhaps the greatest cultural advocate our city has, and one of his best skills is in connecting different artists, and helping them to find the right venues for their work.

SC: What will people learn in Comics for Non-Artists?

NH: I don’t consider myself a “good” artist, but I love comics and sequential art, and think that I can create fun and meaningful comics that communicate interesting stories and messages. And I also have fun when I draw, even when the artwork itself doesn’t always look so great!

So I hope that I’ll be joined by folks from the community who just want to have an hour to draw, and to experiment with the art form of comics, and maybe think about how they — even if they are not “artists” — can still communicate and tell stories through sequential art.

SC: What inspired you to do a workshop like this?

NH: I mentioned above that I don’t consider myself a “good” artist. But for more than a decade, I’ve had people who have encouraged me to create comics. They’ll tell me that they enjoyed something I drew, or they were moved by a comic I made. Too often, I think we are discouraged from having fun in the act of creation. If we’re not “good” at something, we’re told to stop, and to instead pursue the thing that we are actually good at.

SC: What role do independent publishing houses like Burrow Press play in the book world? Why should people read local authors?

NH: I don’t think that there would be a book like Bright Lights, Medium-Sized City, if not for smaller publishers like Burrow Press. I think that Orlando is incredibly fascinating, but at the same time, I don’t know that larger, New York-based publishers really share that view of the city. I don’t know that they consider it a viable setting for “serious” fiction.

We need regional publishers who can better understand what’s missing on the national literary scene. We need regional publishers who are invested in their communities, who want to produce material that local communities are starving for. I mean, people make fun of Orlando because it is a “chain restaurant city,” a city of “bix box stores,” where our culture is just handed down to us by the corporate decision-makers of the major cities up north. If we want to truly proclaim that we have a “culture of our own,” we need regional publishers, and we need to care about the local artists and local authors who contribute to that culture. Our entire diet of culture cannot simply be prepared for us by New York and Los Angeles.

author interview
local author
writers corner
book launch
Comments and postings by library patrons do not necessarily reflect the official position of OCLS or its staff. All comments and posts are public records. Patrons are strongly encouraged to protect their privacy when commenting or posting on social software tools.
About

OCLS
@oclslibrary
Sign your kid up for the BizKids Club⁠—a virtual program that introduces kids ages 9-14 to the world of business &… https://t.co/nO4hZddNM0
1 hour 37 min ago

OCLS
@oclslibrary
"The Hill We Climb" is the first book of poetry to even claim the top spot on the list since its inception in Octob… https://t.co/ghxnUb7F35
14 hours 6 min ago

OCLS
@oclslibrary
Tonight's Friday Night Flick is "Howl," a film about poet Allen Ginsberg and his search for personal and creative e… https://t.co/TZD9ND82EF
17 hours 24 min ago