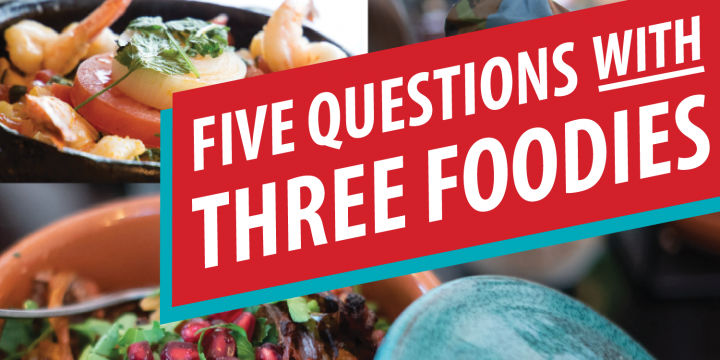 On January 12 at Orlando Public Library, WUCF will host a sneak peek of the premiere episode of the second season of Marcus Samuelsson NO PASSPORT REQUIRED. The event will include a food tasting showcasing the rich diversity of Central Florida’s food scene.

Three local food scene notables will be featured in an informal chat about our area’s vibrant immigrant food culture. That panel includes Faiyaz Kara, author of Gourmet Breakfasts for the Genius and food critic for Orlando Weekly, Ricky Ly, author of Food Lovers’ Guide to Orlando and founder of the blog Tasty Chomps, and Chef Bruno Fonseca, creator of The Foreinger – A Culinary Experience.

In advance of the event, the three were kind enough to answer some questions for us.

Why is it important for people to know where a dish originated?

Faiyaz Kara: Food is a gateway to learning. It's a powerful tool, hinged on identity, that can build awareness and greater understanding of a culture, nation or ethnic group.

Bruce Fonseca: Because you get to learn about the place the food originated from and its people; especially the people’s needs, harvests, habits as well as the correct method to make and enjoy the dishes.

Ricky Ly: Knowing where dishes originate is so important as it tells you so much about a people's culture, history and their environment. When learning about cultures, one of the first ways we learn is through their cuisine. We gather our families and communities around food, whether it is for our daily meal or festive occasion.

What do you hope people learn about Orlando’s food scene with this event?

FK: That it's no longer homogeneous. It's now as diverse as any other city in America.

BF: That the scene itself has so much to offer in terms of deliciousness, freshness, high culinary IQ and different opportunities to enjoy different foods that would be out of the focus of a typical dinner in Orlando. This is part of our city’s up and coming culture and fabric. We need to support the scene’s hard work as a whole.

RL: I hope people will learn about how diverse Orlando's food scene is and can be. With so many immigrant communities – from Vietnamese to Brazilian to Puerto Rican and more – Orlando is truly home to so many different people, each bringing their own flavors and ingredients to the communal table. I hope we will all learn a little more about our neighbors and maybe find a new dish or cuisine to enjoy.

"We need to wholeheartedly embrace the turkey leg as our signature dish."
– Faiyaz Kara

FK: When I was in Toronto a couple of years ago, I notice a swell of indigenous restaurants in the city. We might be focused on immigrant food, but I'd like to see Native American cooking being added to Orlando's restaurant landscape. Modern Indian too.

BF: Portuguese and African as a whole.  We have lots of those folks here and their food is loaded with culture and beautiful flavors.

RL: We are blessed with so many wonderful cuisines from all over the world here in Orlando, but I think we could definitely use some more great Persian cuisine – I love the Persian basmati rice pilaf served with a sizzling skewer of beef shish kebabs.

Do you think our food scene would be as diverse without our theme parks?

FK: I'd like to think so. There are cities with nowhere near the tourist numbers Orlando gets – places like Asheville, Austin, Oxford, Mississippi even – and their food scenes are thriving and diverse.

BF: It’s my opinion, and I think of many others, that Orlando wouldn’t be 25% of the city that it is today without the attractions. Obviously the attractions brought people from all over the country and the world here and those people contributed to all sorts of great differences that make us a vibrant city today.

RL: I think we owe a bit of our diversity to the theme parks – many people from all over the world come to Orlando to experience our world class theme parks and quite a few stay and make Orlando their dream home. When Epcot first opened in the early 1980s, there were people who came from Italy, Japan, Morocco and many other places as a part of the World Showcase and many of those families still live and thrive here in Central Florida today.

What would you consider Orlando’s signature dish?

FK: We need to wholeheartedly embrace the turkey leg as our signature dish. Give it the proper gastronomic attention it deserves. Let's roast it. Sear it. Citrus-marinate it. Let's Korean-fry it and make it a common sight from food trucks to fast-casual eateries to fine dining establishments across the city.

BF: An immigrant dish: PHO. It represents the Vietnamese community, that has been a huge part of who we are. Hard working, family business owners, and they also have adopted Orlando as their own.

RL: Some may say it is the honey nougat glace, but I think our signature dish is still in formation. We are still a young city compared to others, but I think our food culture is definitely maturing as more people put down roots here. We are on the cusp of finding ourselves, and I don't think it is a coincidence that a lot of "signature" dishes from the big cities are a creation of immigrant culture, interacting and changing with the ingredients and techniques favored by their city. In a lot of ways this is how culture is – we think of it as something stagnant and traditional, but in reality it is something fluid and changing like water filling up whatever vessel it finds itself in, but at the end of the day it's still water – something nourishing.

wucf
no passport required
pbs
interview
food
tv shows
Comments and postings by library patrons do not necessarily reflect the official position of OCLS or its staff. All comments and posts are public records. Patrons are strongly encouraged to protect their privacy when commenting or posting on social software tools.
About