From the Director: February 2019 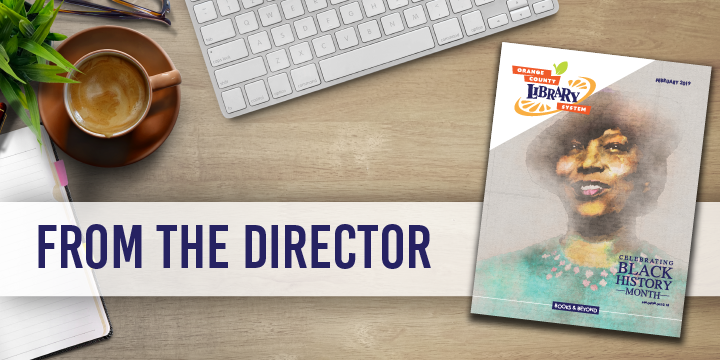 It has been 30 years since the Black Caucus of the National Council of Teachers of English came up with the idea to sponsor an African-American Read-In. The event, held each year during Black History Month, highlights the contributions of African-American authors to literature.

Since the NCTE adopted the concept, the African-American Read-In has gained momentum. Each February, organizations all around the world host events in their communities. In 2018, 73,345 people participated in read-ins across 34 states and Canada, shining a spotlight on African-American authors and encouraging young people to take an interest in reading.

I’m proud to say that the Orange County Library System is one of the organizations that participate in this important event each year. As part of our celebration of Black History Month, we’ll host the African-American Read-In on February 24 at 2 p.m. at the Orlando Public Library. The event features music, dance and readings by local authors, leaders, storytellers and athletes. Our list of participants this year includes Orange County Mayor Jerry Demings, Orange County Clerk of Courts Tiffany Moore Russell, Nerd Nite Orlando host Ricardo Williams, Paralympic athlete April Holmes and WESH-2 News anchor Jasmin Bailey. This is always an uplifting and fulfilling event with an important mission, and I hope you will join us.

Of course, that’s not the only event we’re hosting in honor of Black History Month – we’ll also have a variety of other events and programs, including a Black History Month celebration at our Southeast Branch, a showing of the PBS documentary Race: The Power of Illusion at our Edgewater Branch, music from Afropop band Wassalou in the Orlando Public Library, and plenty more. Check out our Black History Month webpage for more events, locations and details. 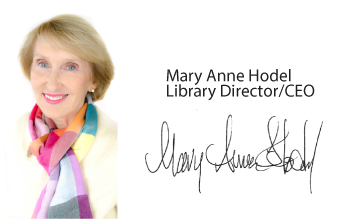 from the director
library staff
black history month
Comments and postings by library patrons do not necessarily reflect the official position of OCLS or its staff. All comments and posts are public records. Patrons are strongly encouraged to protect their privacy when commenting or posting on social software tools.
About

OCLS
@oclslibrary
Looking for the perfect books for your child's age? Check out this ultimate guide for appropriate titles for books… https://t.co/0fUaFAwZh6
10 hours 35 min ago

OCLS
@oclslibrary
Now adapted into a big-budget Netflix Original series, get in on the ground floor with one of the most critically a… https://t.co/MT8vVnroTo
13 hours 13 min ago