The Empire series is the shortest and does little to advance the saga as a whole. Instead, each book for this sequence has its own independent story. They are vignettes, depicting a Galactic Empire in the process of becoming established, and the turmoil that is experienced by those living under its extensive rule.

“Asimov's Galactic Empire was the first example after Olaf Stapledon's 1937 science fiction novel Star Maker of one of the eight stages of a ‘consensus cosmogony’, also called the Science Fiction Cosmology, identified by Donald A. Wollheim in the 1950s, which science fiction writers needed only hint at in their stories for experienced SF readers to slot into their perception of future history and envisage the background to the tale without the writers having to expend time and space explicitly laying it out. ” [1]

This is a great template used to demonstrate the total potential history of space civilization.  We can use it as a measuring tool for science fiction, and particularly to exemplify how grand Asimov’s future history spans. The Robots era would be attributed to Stages 1-2, while Empire would be Stages 3-4. As you can see, however, Asimov wrote on every level. 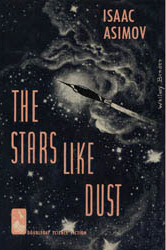 The Stars, Like Dust starts off with adventure, attempted assassination and stolen spaceships. We are offered a glimpse at a proto-empire, loosely based on the Mongols, as rebellion is at a tipping point. Its authoritarian nature forces the intellectual elite to seek out a means to change the galactic political climate. The story ends with the insinuation that there will be a transfer of power to a more reasonable form of rule, albeit through rallying behind an anachronistic symbol.

Asimov was ultimately remorseful of how he chose to end the story. It was his editor that proposed a certain addition to the novel that made it not make sense to the all-encompassing storyline. [2] The added anachronism comes off as naïve when the plot takes place so far in the future. Generally speaking, in science fiction, as society progresses further, ideas such as nationalism are weeded out due to them being divergent in their nature. 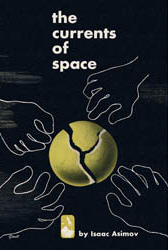 The Currents of Space takes place further in the future where now a new empire has arisen. This new empire is a representation of the Roman Empire. Uniting millions of worlds, the Trantorian Empire seeks to integrate a world that is the single producer of a high-quality fiber called “kyrt.” The world is called Florina, but it is dominated and exploited by another planet called Sark. The socio-political entanglement is the root of the conflict for this story, and parallels are drawn between the relationship of these political powers and slavery in the American South. There is also an element of real world science that is put forth through the use of the narrative. The title, The Currents of Space, refers to carbon currents. Asimov speculated that these currents had something to do with nova formation. The sun of Florina in its proto-nova stage means potential catastrophe if the Sark government doesn’t accept the truth. He took his hypothesis and used it as a device in his fiction. Later published editions contain an afterword from Asimov explaining that the scientific community now knows that his idea is not true and he asks that you please suspend your disbelief and enjoy the story anyway. 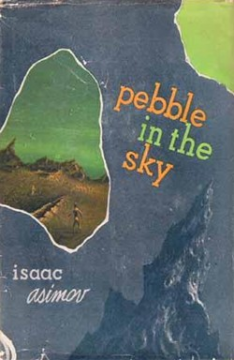 Pebble in the Sky takes place last chronologically; however, it was his first-ever published novel. The premise is of a man accidently jettisoned into the future from our time. Simultaneously, he is granted amazing mental abilities. This novel opened up the avenue of time travel for the rest of the saga. We begin the book at Stage 1 of the “Science Fiction Cosmology,” and end up in Stage 4 with hints of the eventuality of Stage 8. Once time travel becomes possible, the prospect of harnessing it is inevitable. Of all the Empire books, this one extends its roots furthest into the pseudo-history—a unique feature is that the book takes place on Earth. In this future, Earth is dominated by the Trantorian Empire, which causes passionate revolt among the people. We know from the Robot era that that kind of extraterrestrial hatred has been brewing for thousands of years. In this novel, we see it reach a boiling point. It contains many plot elements that are later used as the center of conflict.

sci-fi
science fiction
book recommendations
literary criticism
books
adult fiction
Comments and postings by library patrons do not necessarily reflect the official position of OCLS or its staff. All comments and posts are public records. Patrons are strongly encouraged to protect their privacy when commenting or posting on social software tools.
About

OCLS
@oclslibrary
So you've found out your #Enneagram type. Now what? Check out these book recommendations based on each Enneagram ty… https://t.co/r0XZDamz7D
12 hours 17 min ago

OCLS
@oclslibrary
Looking for what to watch next? You can watch critically-acclaimed movies, inspiring documentaries, award-winning f… https://t.co/RiX6zf85tK
16 hours 49 min ago