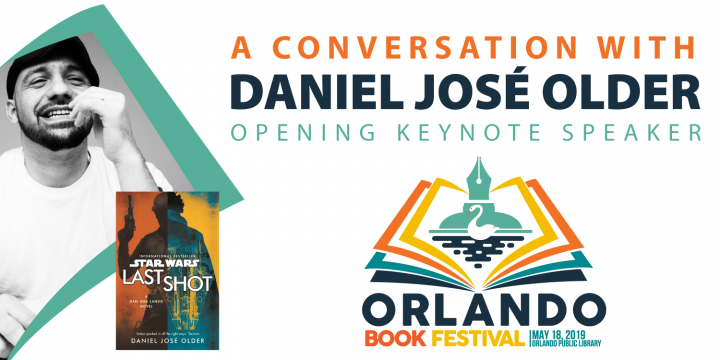 The Orlando Book Festival is a day-long celebration of books at the Orlando Public Library. Join us for panels, writing workshops, book signings and more from bestselling authors from all over the country.

Daniel José Older, Opening Keynote Speaker for the Orlando Book Festival, is the New York Times best-selling author of the Middle Grade historical fantasy series Dactyl Hill Squad, the Bone Street Rumba urban fantasy series, Star Wars: Last Shot and the award winning Young Adult series the Shadowshaper Cypher, which won the International Latino Book Award and was shortlisted for the Kirkus Prize in Young Readers’ Literature, the Andre Norton Award, the Locus, the Mythopoeic Award and named one of Esquire’s 80 Books Every Person Should Read. You can find his thoughts on writing, read dispatches from his decade-long career as an NYC paramedic and hear his music at danieljoseolder.net.

Orange County Library System staff member Sarah Fisk had the opportunity to speak with Older about his writing process and his thoughts on being an author.

SF: What first sparked your interest in writing?

DJO: I’ve always loved writing. I went in and out of it for a lot of my life, not sure which way to go with it. For a lot of my 20s, I was doing music, but I was still trying to tell stories through music. Some of it was really practical: I thought if I write a book, I don’t have to deal with musicians, I don’t have to deal with recording, I can just sit down on my laptop and write a book and that ended up working out really well. I’ve always been a storyteller, so it was just a question of which medium was going to work the best.

SF: What is your favorite part of writing books/being an author?

DJO: I love the act of writing, itself. I love putting the pieces of the story together and finding out what’s going to happen and coming up with cool characters and worlds and magic. That part of it – which is really the whole thing, in a way – the creative part is so much fun for me. Even when there are tight deadlines and it feels like everything else in the world is falling apart, story is one of the things that remains true. Figuring out how all the pieces fit together is really one of the most joyful parts.

SF: Do you have any writing quirks/superstitions/obsessions?

DJO: One ritual I try to hold to, particularly in times like this when things are really busy, I try to make myself sit down and listen to a whole song before I start writing. It makes it feel less like I’m in a hurry. It gets more centered and focused and slows me down. Even if you’re on a tight deadline, writing in a hurry doesn’t work well. Sometimes you have to trick yourself into feeling like you’re not in a hurry, even if you are. Either way, it’s good to tap into your creative side and actually listen to the song, enjoy it, then start writing.

SF: What’s the most interesting thing you’ve ever researched for a book?

DJO: I think the whole Civil War is fascinating. For the Dactyl Hill Squad, a middle grade historical fantasy which takes place during the Civil War but there are dinosaurs, I really enjoyed researching some of the more obscure parts of the Civil War. Everyone focuses on Gettysburg and a lot of the Virginia fights, which are amazing, but the whole country was at war in different ways. Sometimes it was political, sometimes there were riots in the street. Around here in Louisiana, there’s a whole fascinating history of things that happened during the Civil War that weren’t necessarily battles, but different struggles and different ways people fought for freedom. That was also true in New York.

SF: What is your one essential piece of advice for aspiring authors?

DJO: Writing begins with forgiveness. What that means is: even if we didn’t write yesterday or even for the past month we still have to forgive ourselves and start writing today. That’s the most important thing. There are going to be days and whole periods of time where we’re not able to sit down and write but writing also happens in our heads when we’re going about our lives. It’s not about time in front of the computer sometimes; it’s about the time you spend thinking about your story and also living your life because that’s where your story comes from. All of that is part of the process so it’s important to honor that and not beat ourselves up.

SF: What is the most important book you’ve ever read and why?

DJO: The one I go back to the most in the past couple years has been The Cross of Redemption, which is uncollected essays of James Baldwin. He’s the one that says it the best in terms of writing and being a creative in this country and in this time, even though a lot of those essays were written in the 50s and 60s and 70s. He still speaks to so much that is happening right now and the complexity of being a writer, particularly a writer of color, in a world that doesn’t always love us and what that means and how to navigate that.

SF: You write for a few different age categories and genres. What has drawn you to those and are you planning on expanding even further?

DJO: I think you have to write the age group that the story requires. The story determines that. I don’t know what will be next. I’d love to try other mediums and other age groups, for sure.

orlando book festival
author interview
YA books
YA fiction
YA literature
authors
Comments and postings by library patrons do not necessarily reflect the official position of OCLS or its staff. All comments and posts are public records. Patrons are strongly encouraged to protect their privacy when commenting or posting on social software tools.
About

OCLS
@oclslibrary
Do you ever wonder what it's like working in book publishing? Take a look at what it's like to work as a literary a… https://t.co/ENsDBh56Y6
5 hours 55 min ago

OCLS
@oclslibrary
"Life is real! Life is earnest! And the grave is not its goal." Happy Birthday to poet Henry Wadsworth Longfellow… https://t.co/arebZ5YPRf
8 hours 38 min ago