14th Annual Southwest Author Series: A Conversation with Melanie Benjamin, author of Mistress of the Ritz 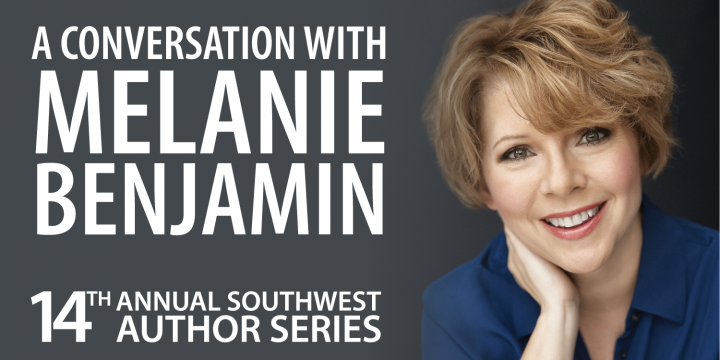 Melanie Benjamin has captivated readers with her bestselling historical novels, including The Aviator’s Wife, The Swans of Fifth Avenue, and The Girls in the Picture. And, she is about to do it again. Benjamin’s forthcoming Mistress of the Ritz tells the compelling story of the extraordinary real-life American woman who secretly worked for the French Resistance during World War II – while playing hostess to the invading Germans at the iconic Hôtel Ritz in Paris.

Melanie Benjamin is the featured author at the 14th Annual Southwest Author Series, presented by the Rotary Club of Dr. Phillips, coming Friday, April 12, 6–8 p.m. at the Southwest Branch. A book sale and signing will follow.

The editors at Random House had a chance to talk with the author about her inspiration, her research, and traveling to the iconic hotel in Paris.

This interview was conducted by Penguin Random House and originally published in Library Journal, reproduced here with permission.

What inspired you to write this novel?

Part of it was a desire finally to write a World War II novel, I think. This is my sixth historical, and all my previous ones jumped around in time, from Victorian England to New York of the 1950s and 60s. I had not yet written about the most important event in recent history, World War II. There are still so many unexplored stories, especially about women, from that time. So I think it was inevitable that I would write about it, given that all my books have been about unexplored women’s stories. And then I read a book about the Hotel Ritz during the German occupation of Paris, which is where I first read of Blanche and Claude Auzello, this astonishing American woman and her French husband, and their extraordinary experience playing host to the Nazis at the Ritz. I knew I had to write a novel about them!

There is so much research that goes into your novels. Where do you start, and how to do you manage that process?

I usually start by reading as much as is written about the subject. While I’m reading, I’m making mental notes and pulling out the main narrative thread – the major story of the life that I want to tell. That means I have to leave some things out, of course; this is why I write fiction. I have to find the strong emotional thread that will drive a narrative. Then, if it makes sense, I do like to travel to the locations. Often it doesn’t make sense because I’m writing about a place so long ago, it’s vastly changed today. But Paris doesn’t change, which is why I love it! So I did get to spend some time in Paris, and at the Ritz itself, where I was given a behind-the-scenes tour. It was amazing, a pinch-myself moment! I am not of the class who can usually stay at the Ritz, not by a long shot. But this was a once-in-a-lifetime chance that I couldn’t pass up, and I was in my element!

After the research, which usually only takes about a month or so, I then take all the facts I gleaned and plot out the story I want to tell in my mind. I don’t write an outline, beyond a basic timeline of events so I can get the dates right. But I do determine where to start (and it’s not always at the beginning) and where I see the novel ending (again, not always at the end of a life), and the major events I want to hit along the way. So when I sit down to write, I know the story I want to tell.

Your novel tells the little-known story of Blanche Auzello, a real-life American woman working for the French Resistance during World War II. What drew you to her character?

How can you not love a woman who threw a glass of champagne in a Nazi officer’s face? She was so gutsy. I had to write about her! I was also drawn to the notion of trying to erase a part of your life, believing you can do so easily, yet finding that it’s still with you, it still defines you decades later. Then allowing that discovery to propel you to action – in Blanche’s case, absolute heroics. There is also the fascinating marriage between Claude and Blanche. She was an American, a former flapper; he was a very typical Frenchman in a certain way, when it came to marriage and mistresses. Their volatile marriage, yet the love that shone through most brightly during a time of war, was a treat to write.

Your novels often juxtapose a glamorous setting or time period with a harrowing story. What makes this pairing so interesting to write? Why do you think readers find it so compelling to read about?

I love that contrast, I really do. For one thing, I think it makes it a bit easier for a reader to take, when dark things happen within brilliant walls. There’s always something fun, juicy – aspirational – about reading of fancy homes and yachts and hotels and such. It’s like reading a great gossip magazine. But then, to discover that bad things happen even there, it’s such jolt, I think. We like to think there are certain places where nothing bad can happen. Or that if we had all the money in the world and fancy clothes, our troubles would be over. Then we read these books and we understand that things like war and betrayal happen everywhere, that they’re universal. And so we realize our shared humanity, the common thread connecting every living person, regardless of class.

What do you hope readers gain from reading Mistress of the Ritz?

I hope that they thrill to this unknown story of heroism and betrayal within the famous, gilded walls of the most iconic hotel in the world. And that they fall in love with Blanche as much as I did!

What’s next for you?

I’m just beginning a new novel, and for the first time, it’s not about a real person. It is about a real historical event that hardly anybody knows about but is a truly epic story. So the history is real, but the characters and their stories are a combination of some of the oral histories of that time, and my own imagination.

Filled with celebrity cameos, a complicated marriage, a nation at war, and inspiring acts of heroism, there is so much for readers – and book clubs – to love in Mistress of the Ritz.

southwest author series
author interview
guest writer
melanie benjamin
Comments and postings by library patrons do not necessarily reflect the official position of OCLS or its staff. All comments and posts are public records. Patrons are strongly encouraged to protect their privacy when commenting or posting on social software tools.
About